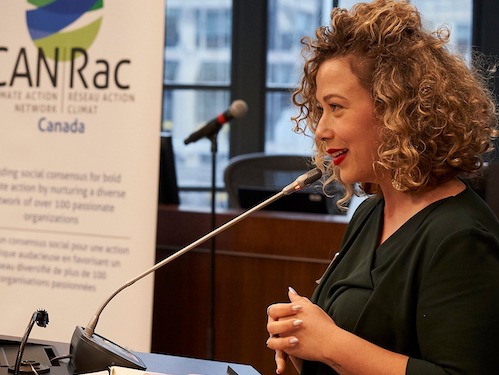 Climate Action Network-Canada Executive Director Catherine Abreu is the recipient of this year’s Jack Layton Progress Prize, awarded annually “to an individual or organization who has run a particularly noteworthy political or issue campaign” for justice, sustainability, or democracy.

Abreu won the prize from the Broadbent Institute and Toronto activist and former MP Olivia Chow as a leader who “builds powerful coalitions to advance transformative action on climate change,” the Institute writes. “She played a central role in the release of world scientists’ groundbreaking report on Global Warming of 1.5° as Head of Delegation for international civil society at the October 2018 IPCC meeting.”

As well, “in 2017, Catherine founded the Environment and Energy Working Group of the G7. Under Catherine’s leadership, the impact and influence of Canada’s Climate Action Network has grown dramatically—adding 25 member organizations, quadrupling the organizational budget, and building an impactful team in the span of three years.”

Along the way, “she has become one of the most influential players in Canadian and international climate politics, and has become a credible, go-to spokesperson for journalists,” Broadbent adds. “Most critical has been Catherine’s ability to seek out and build strategic relationships of trust with all CAN-Rac members as well as dozens of non-member allies in Indigenous communities, organized labour, health care providers, young people, and the private sector.”