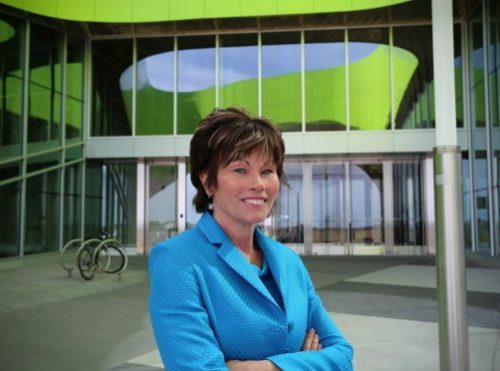 “Now is a great time to be building a pipeline because you can’t have protests of more than 15 people,” Savage said, in a recording posted on the association’s website five days after Alberta government relaxed pandemic-related restrictions to allow outdoor gatherings of up to 50 people. “Let’s get it built.”

“While the interviewer laughs, Savage does not,” The Canadian Press reports.

“Well, at least we are seeing some honesty for once,” responded #FridaysforFuture founder Greta Thunberg, in a tweet sharing CP’s initial report on the podcast. “Unfortunately, this how large parts of the world are run.”

During the podcast, and with no prompting from her host, Savage “goes on to suggest the economic turmoil caused by the pandemic favours pipeline construction,” the news agency writes.

On Tuesday, Savage doubled down on her comments. “I don’t think anybody should be surprised that Alberta is pro-pipeline,” she told CP. Provincial Environment Minister and government house leader Jason Nixon said his colleague “was quite rightly just pointing out the obvious that at this moment, because of COVID, there is probably less people taking the opportunity to go out and protest pipelines”. Premier Jason Kenney declined to comment.

Earlier, Savage spokesperson Kavi Bal acknowledged his boss was on the podcast. “We respect the right to lawful protests,” he said. “I would note that the limitations to public gatherings…have benefited no one—including project proponents and any opposition groups.”

But CP points to a disconnect in the province’s responses to different types of protest. Kenney “defended the right to protest in the case of a man recently arrested at the legislature as he was protesting public health lockdown orders,” writes veteran reporter Bob Weber. “Kenney said at the time he would modify such orders to ensure they didn’t interfere with that right, as long as guidelines were being respected.”

But “the government has shown less tolerance for civil disobedience,” he adds. “In February, it introduced legislation imposing stiff fines and possible jail terms for protesters who damage or interfere with the operation of a wide range of energy infrastructure—although such acts are already illegal.” That legislation passed and is awaiting royal assent.

NDP energy critic Irfan Sabir said Savage’s comments ” do not come as a shock,” adding that the government has “already used the pandemic as an excuse to suspend environmental monitoring. When combined with the minister’s latest comments, this will harm the reputation of Alberta’s energy industry and inhibit our ability to attract investment and get our product to market.”