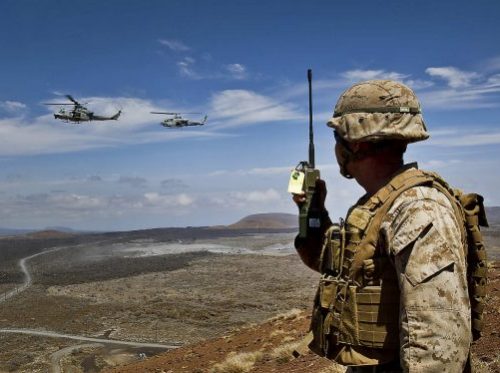 With an annual budget of US$700 billion-plus, and an outsized—and morally compromised—standing as the ultimate defender of the national interest, the U.S. Department of Defense (DoD) has flourished at the expense of agencies far better positioned to protect the public, like those dedicated to preserving public health and solving the climate crisis.

Itemizing a few of the most egregious recent shopping expeditions by the American military—the Joint Strike Fighter plane, “expected to cost $1 trillion over its lifetime,” and brand new aircraft carriers with a “toilet problem requiring ‘specialized acids’ that run $400,000 a flush”—Grist asks readers to imagine how differently COVID-19 could have panned out “if all that money had been spent on stockpiling ventilators and efforts to stop pandemics before they started.”

While the DoD “has assumed a key role in responding to the pandemic, sending ships to help overburdened hospitals in New York City and Los Angeles, bringing millions of N95 masks out of its reserves, and getting to work on a coronavirus vaccine,” the entity was actually designed “for blowing things up and moving things around”—making it ill-suited for the life-saving work of the moment.

“The military, despite its best efforts, is not the best tool for taking on a raging public health crisis,” Grist writes. Take those hospital ships: built to treat injuries suffered in combat, they have proven “imperfect vessels for containing infectious diseases.” More generally, “experts have criticized the military’s COVID-19 response as sluggish, with ventilators and masks coming too late.”

DoD has acknowledged such inefficiencies itself: in March, Defense Secretary Mark Esper told the Associated Press the armed services “want to be the last resort,” not the first line of defence.

That responsibility would better lie with the Centers for Disease Control and Prevention (CDC), the U.S. Department of Health, or state- and local-level agencies, observes Grist—but such agencies are hardly funded well enough to do the job effectively. In 2020, the CDC’s funding from Congress was “a little less than $8 billion.”

“Funneling trillions of dollars into ‘defence’ has left the country unprepared for other shocks,” writes Grist. A recent primer from the National Priorities Project at the Institute for Policy Studies laid out how badly—and for how long—public health protection and climate action have been losing ground as money is steadily funnelled into military hardware.

Adding to the irony is the gargantuan carbon “bootprint” generated by producing and operating all the fighter planes and ships that the military parades around the world. “It’s the biggest greenhouse gas emitter of any government agency on the planet…and has emitted more than one billion tonnes of carbon dioxide since 2001,” writes Grist, citing a report from Brown University’s Costs of War project.

Finally, there is the toxic co-dependency that has evolved between the American military and the fossil fuel industry. Oil is the driving force behind 25 to 50% of all wars globally since 1970, said Lorah Steichen, outreach coordinator at the National Priorities Project.

“The U.S. military is often framed in the national interest, the best interest of American people. But it’s pretty clear that military operations are tied to protecting the economic interests of the fossil fuel industry,” she told Grist.

Such a toxic interdependency should give pause to those who believe that labelling either the climate crisis or the arrival of pandemics as “national security threats” can backfire, Steichen warned. As crises worsen, the federal government can funnel yet more money into planes and ships, “rather than into solutions that could address our public health and climate crises at their root.”