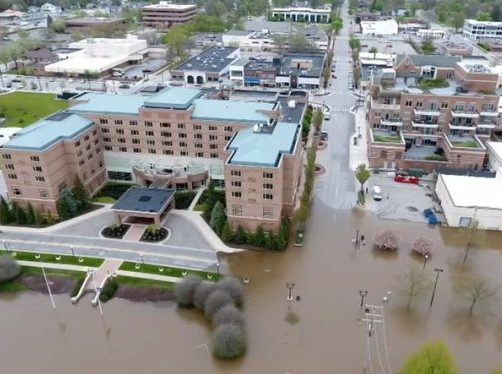 Safety officials warn that last week’s double dam failure and resulting, massive flood in Michigan foreshadows a frightening future for aging dams throughout the United States—structures that were never intended to withstand the torrential rains that are arriving with climate change.

“The flooding disaster in Michigan this week emphasized, in stark reality, the warnings by scientists that climate change is causing heavier and more frequent rainstorms in many parts of the country,” writes InsideClimate News. On May 20, eight inches of rain pelted the Tittabawassee River watershed, triggering the failure of two dams about 241 kilometres northwest of Detroit. The resulting deluge ultimately led to “the evacuation of 11,000 people, the flooding of the city of Midland, and the inundation of its sprawling Dow Chemical Company complex.”

“We are seeing more rain, and more precipitation in general,” said Richard Rood, professor of meteorology at the University of Michigan’s College of Engineering. The region is also seeing events that are more extreme, a trend that “has been emerging for the last 50 years,” he told InsideClimate.

The Fourth National Climate Assessment, produced by U.S. climate scientists in 2018, specifically warned about aging and deteriorating dams, InsideClimate reports—a weakening of U.S. infrastructure that poses “a growing threat to human life, property, and ecosystems across the country.” A recent report by the Association of State Dam Safety Officials (ASDSO) found that “the nation’s 87,000 dams that are not owned or operated by the federal government needed US$66 billion in repairs.”

The Washington Post notes that the majority of the nation’s dams are privately owned, “including about 75% of the dams in Michigan.” Compounding the problem, “many private dam owners do not finance regular rehabilitation projects,” and “there often isn’t a clear mechanism to pay for needed repairs and upkeep.” Such operators should “lose their federal licencing—and thus their power revenue,” writes the Post.

But danger can lie even in dams that are kept in good shape. Citing ASDSO President-Elect Bill McCormick, InsideClimate reports that dam designs are “based on past weather patterns and do not take into account how the climate is changing.” The association is calling for “forward-looking” national guidance to allow the states to “do a better job of protecting the public.”

In the Michigan dam failures, InsideClimate reports that owner Boyce Hydro Power LLC has “a history of repeated violations,” including a failure to address safety flaws in one of the dams that already led to a 2018 decision by the Federal Energy Regulatory Commission to revoke its licence to generate electricity.

At the Dow Chemical complex, InsideClimate says, “the immediate fear is that the floodwaters have inundated a chemical containment pond at the site and may have washed toxic material into the river.” Company officials claimed only brine was released with the floodwater, but questions remain about the damage that may have been done to “seven other containment sites located at various points upriver and downriver from the chemical plant.”

Also thrown into question is the safety of the region’s Superfund sites—highly polluted, hazardous areas flagged for long-term cleanup—as the Michigan dam collapses reveal the vulnerability of such areas in the face of climate change.

“This is a perfect example of what a climate event can do to these sites,” said Bill Muno, a former EPA director of Superfund sites for the Great Lakes Region. “It seems, given the fact that these climate events are becoming more frequent and severe, it’s time to circle back and re-evaluate climate threats.”

‘Office Centricity is Over’, Shopify Declares, as Tech Companies Embrace Working from Home