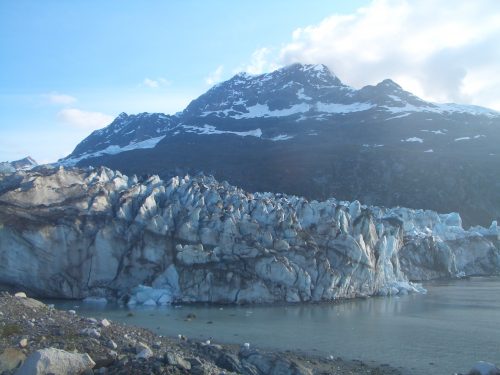 Glacial retreat high above an Alaskan fjord has put the area at imminent risk of a landslide-triggered tsunami—and researchers are calling for real-time monitoring to protect residents and recreationalists.

“Warming temperatures have caused the retreat of a glacier that helps support a steep, mile-long slope along one flank of a fjord in Prince William Sound, about 60 miles (96.5 kilometres) east of Anchorage,” reports the New York Times. “With only a third of the slope now supported by ice… a landslide could be triggered by an earthquake, prolonged heavy rain, or even a heat wave that could cause extensive melting of surface snow.”

Observation of the Barry Sound area only began in April, when a team of researchers from 14 academic and scientific institutions came together “as part of a NASA-financed project to study land mass movement across the North American Arctic,” reports the Times. Using computer modelling, the researchers discovered that “a collapse of the entire slope—roughly estimated to be 500 million cubic metres of rock and dirt, or several hundred times the volume of the Hoover Dam—could cause a tsunami that would start out at several hundred feet high.”

When such a wave reached the community of Whittier—which it would within about 20 minutes—the “wall of water” could still be close to 10 metres high, causing massive destruction.

The Barry Arm fjord is popular with tourists, hunters, and fishers, notes the Times, and the town of Whittier itself “is typically a disembarkation point for thousands of cruise ship passengers headed inland to Anchorage and points north.” While rare, tsunami-inducing landslides “have occurred in Alaska and elsewhere,” including the 2015 collapse of a slope in a fjord west of Yakutat, which “spawned a tsunami that was initially more than 600 feet (183 metres) high,” and a 2017 wave on the west coast of Greenland that created a wave starting at more than 91 metres high. That tsunami flattened a village and killed four.

As destructive as those waves were, “Barry Arm would potentially be much bigger in terms of the energy involved,” said Hig Higman, a member of the research team and an expert in geological hazards. “It’s in a whole different class than we’ve ever even studied after the fact, much less before it happens,” he told the Times.

The collapse of the Barry Arm mountainside could happen within the year, and is likely within the next two decades. With every inch the glacier recedes, the risk gets higher, said team member and hydrologist Anna Liljedahl.

“We realized we needed to let people know,” Liljedahl explained to the Times. The team hopes that, in revealing the danger, they will spur policy-makers to fund a monitoring and alert program that could save the region’s residents and adventurers from being hit without warning.