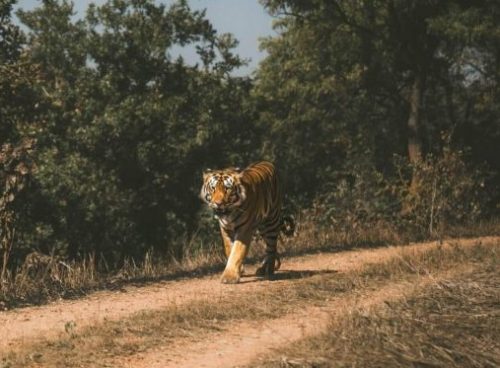 The global push to save an iconic species from extinction struggles, as tigers retreat before the relentless growth of roads.

LONDON, 4 May, 2020 − Humans have made inroads into the last territory of the tiger – literally: the inexorable increase in roads is driving the tigers’ retreat.

A new study of the wilderness set aside for the rapidly-dwindling populations of Panthera tigris in 13 countries warns that more than half of all this supposedly untouched reserve is within 5kms of a road.

Altogether, tiger conservation landscapes considered crucial for the recovery of an endangered species are now home to 134,000 kilometres of road. This intrusion alone may have reduced the abundance of both the carnivore and its natural prey by about one fifth.

And by 2050 researchers expect that another 24,000kms of road will have been built through the 1.16 million square kilometres of wilderness officially conserved in Russia, China, India, Myanmar, Nepal, Bangladesh, Thailand, Vietnam, Malaysia, Indonesia, Cambodia, Laos and Bhutan. Many of these will have been built under China’s so-called “belt-and-road initiative” in the developing world.

“Our analysis demonstrates that, overall, tigers face a ubiquitous and mounting threat from road networks across much of their 13-country range,” said Neil Carter, of the University of Michigan in the US, who led the research.

“Tiger habitats have declined by 40% since 2006, underscoring the importance of maintaining roadless areas and resisting road expansion in places where tigers still exist, before it is too late”

He and colleagues report in the journal Science Advances that they calculated road density, distance to the nearest road and average species abundance in all 76 blocks of land set aside for tiger conservation, to confirm conservationists’ worst fears.

Encroaching roads discourage the herbivores that tigers might prey upon; they degrade the habitat for all wildlife in the region; and they provide easier access for poachers, for whom a tiger carcass is a valuable commodity. In the Russian Far East, collisions with road vehicles were enough to reduce tiger survival rates.

The road seems the first enemy of conservation. Researchers have recently established that even the presence of human intrusion – the border of a ranch, a commercial clearing, a palm oil plantation or just a simple road – is enough to weaken and in some way damage the integrity of the 500 metres of wilderness next to the clearing.

The global record for the protection of those areas set aside for the conservation of endemic species is not good: another study found that, worldwide, since 1993, more than 280,000 sq kms of natural reserve had been subjected to “intense human pressure.”

And a third study fingered the road itself as the problem, and a growing problem: roads already fragment the world’s landscapes, and by 2050 governments will have added another 25 million kilometres of asphalt, traffic and settlement, most of it in the developing world.

Thanks to human population growth and climate change, the planet is poised for the extinction of wild creatures and plants on a massive scale. So the tiger study reflects a wider pattern.

The difference is that for more than 50 years conservationists and governments have encouraged international efforts to conserve one of the most iconic and at the same time one of the most endangered of all the big cats, but the numbers are still falling, as roads turn what had been undisturbed habitat into an archipelago of little “tiger islands” in which populations are isolated from each other.

The scientists found that those areas most strictly protected in the tiger conservation were less densely interrupted by roads: however, these densities varied widely across countries. China’s average road density in tiger conservation landscapes was almost eight times greater than, for example, Malaysia’s.

“Tiger habitats have declined by 40% since 2006, underscoring the importance of maintaining roadless areas and resisting road expansion in places where tigers still exist, before it is too late,” Dr Carter said.

“Given that roads will be a pervasive challenge to tiger recovery in the future, we urge decision-makers to make sustainable road development a top priority.” − Climate News Network