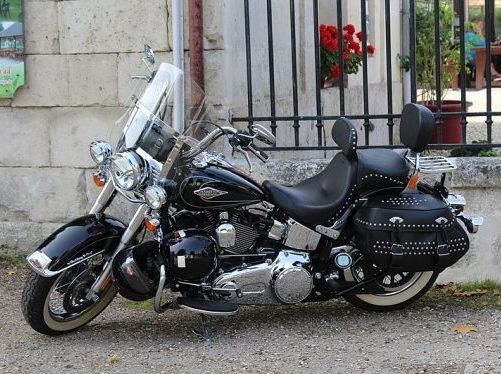 In a move that suggests the climate crisis is shifting even those fantasy purchases typically associated with midlife angst, legendary motorcycle company Harley-Davidson is hoping to turn up the throttle on its production of e-motorbikes.

During a phone call with investors last week, Harley CEO Jochen Zeitz said his company is committed to advancing its “efforts in electric” while continuing to expand its “profitable” line of traditional heritage bikes, reports Greentech Media. In the same call, Zeitz revealed a 45% drop in profits over the last quarter.

Harley-Davidson bikes are “sometimes stereotyped as an impulse purchase for men in a midlife crisis” and may be falling out of fashion with younger riders, reports Greentech. While Zeitz placed some of the blame for the drop in profits on the pandemic, “Harley-Davidson’s share price had been sliding for years before COVID-19 dealt it a stinging blow.”

Enter the Harley-Davidson LiveWire. Launched last summer, the e-motorbike “has raised eyebrows… thanks to stunts such as beating a Tesla Model 3 in a drag race and travelling 1,000 miles in 24 hours.”

Harley-Davidson is “something of an early mover in the electric motorcycle market, compared to other traditional manufacturers,” Greentech writes. The company’s interest in e-motorcycles is not purely a matter of dollars and cents, but rather an expression of “committed environmentalist” Zeitz’s own desire to “lead the electrification of motorcycling with a full EV portfolio, which will further reduce the environmental impact of our motorcycles during use.”

Just how successful Harley-Davidson’s e-motorcycles will be remains to be seen. “Electric motorcycles only have around 1% market penetration,” said Nick Albanese, Bloomberg New Energy Finance’s head of new mobility research. Such a weak showing owes mainly to “limited model availability and cultural factors,” he added.

The lower-end electric scooter and moped market, however, “is expanding rapidly,” writes Greentech. In stark contrast to the Tesla-trouncing LiveWire, which retails at US$29,799, mopeds and scooters “are hardly status symbols”. That means their buyers have more interest in economic considerations like fuel savings than the buyers of large heritage bikes, and they are well-suited to cities, “where owners are unlikely to suffer range anxiety.”

Asia and India are the primary markets for such vehicles, Greentech adds: in India alone, “there are now more than 80 electric two-wheelers on the market, many priced as low as $500 to $1,000.”

But improved battery performance could expand both the geographic and price-point markets for motorcycle companies like Harley-Davidson. “There could be a big first-mover advantage for any company that does for motorcycles what Tesla did for cars,” said Albanese.

Could Harley be that company? It’s too early to tell, says Greentech. In last week’s earnings call, Zeitz acknowledged that the company’s very survival is threatened by the economic shock delivered by the pandemic, and that “significant changes” will be needed.

“I know we will prevail,” he said. “I’m confident that, with the right focus and changes that I intend to implement swiftly and diligently, we will emerge stronger.”