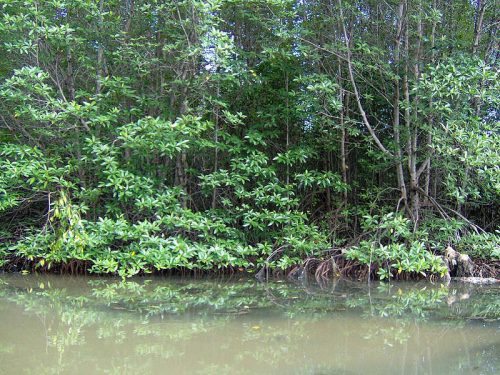 Under the care of a citizen army of forest managers, Ho Chi Minh City’s precious but little-known Can Gio Mangrove Biosphere Reserve has not only rebounded from devastating chemical defoliation during the Vietnam War, but has actually begun to thrive. Development and aquaculture, however, loom as ongoing threats to the area.

That the booming city of nine million is home to “one of the world’s great restored mangrove forests” might well surprise even locals, reports Mongabay News. Covering 75,740 hectares, the forest, designated as a UNESCO Biosphere Reserve Zone in 2000, “includes a 4,721-hectare core area where human activity is strictly prohibited, a 41,139-hectare buffer zone where cultural and ecological development is allowed, and a 29,880-hectare transition zone where normal socio-economic development occurs.” It is this last zone, where both tourist development and aquaculture are going concerns, that remains something of a persistent threat to the well-being of the whole.

But given that 75% of the reserve’s ecosystem was destroyed by chemical defoliants sprayed by the U.S. Air Force during the Vietnam War—and that substantial stretches of the remaining forests were cut down for fuel and building materials once the war ended—it is “something of a miracle” that Can Gio exists at all, writes Mongabay.

“By the late 1970s, 10,000 hectares remained barren, while only 5,600 hectares of forest were useable in any way,” the publication reports. Things took a turn for the better in 1978, when Ho Chi Minh City’s forest department “undertook a massive reforestation program, planting 20,000 hectares of Rhizophora apiculate mangrove trees from specimens taken from the neighbouring Mekong Delta.” Further protection came in 1991 when the reserve was designated a coastal protection forest, ensuring that any further clearing of mangroves to make way for shrimp farms would be strictly regulated.

“There’s one management board, and if someone cuts trees, they use them and they replant—it’s like any use forest in the United States or Europe,” said University of New Caledonia Earth science professor Cyril Marchand.

Marie Arnaud, a University of Leeds mangrove researcher, lauded the city’s ongoing efforts to actively compensate those who live within the reserve—a system called payment for forest environmental services (PFES). “They hire people to check if others are deforesting the mangroves, and they give them a bit of money [725,000 dong, or $31, per month] and train them,” she told Mongabay. “People in Can Gio are very proud of this mangrove forest…they see that mangroves are really valuable and if we destroy them, we destroy the benefits we get from them.”

Protection of mangrove ecosystems could go even further with more public education about their ecological importance, writes Mongabay. According to public officials, Can Gio “serves as the city’s ‘lungs’ by absorbing carbon dioxide and providing oxygen…acts as the ‘kidneys’ by filtering wastewater pollution sent downstream from the city…[and] is a ‘green wall’, protecting the region from storms, typhoons, and tsunamis coming from the East Sea.”

Yet a 2012 International Union for the Conservation of Nature survey of 289 households in the reserve found that while “more than 80% of respondents understood the role mangroves play in protecting the area from storms…only 20% were aware that mangroves filter the water that flows through them.” Less than half of the respondents knew about the impact of the mangroves on their local climate, or about the biodiversity Can Gio supported as a habitat.

While the core of the Can Gio reserve is “very well-protected,” reports Mongabay, the well-being of its fringes is imperiled by ongoing development, including an “extravagant” proposal from a Japanese engineering company that would create “a logistics hub, accommodation facilities within the mangrove forest, and a 2,870-hectare tourism development partially on reclaimed land along the coast.” Some plans envision 600,000 people living within the reserve—more than an eightfold increase from its current population of 71,000. There are immediate threats, too, including “shrimp farming, upstream pollution, and erosion caused by the huge cargo ships that ply the Soai Rap and Long Tau rivers.”

Poverty, too, poses a danger: Although reforestation programs are relatively successful, Mongabay says, poor people still make money by cutting the wood down, rather than looking to the long-term income they can generate through forest protection.

That’s why “the improvement of local people’s livelihood is an important prerequisite to reduce pressure on mangrove forests,” the publication states.