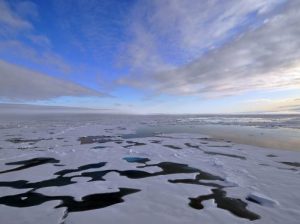 From melting ice to spiking acidity, from stagnating thermoclines to troubled food chains, frighteningly rapid changes are under way in the waters of the Arctic Ocean, while a lack of long-term data leaves scientists and Indigenous peoples uncertain about how to respond.

Canada’s first complete assessment of the Arctic Ocean, “the result of work by dozens of federal scientists and Inuit observers,” has documented “a vast ecosystem in unprecedented flux: from ocean currents to the habits and types of animals that swim in it,” reports the Canadian Press. And climate change in the Arctic may be coming faster than with “any other water body on Earth.

“And such changes are happening in a place that remains significantly mysterious, writes CP. “Who knows what else is down there?” asked lead scientist Andrea Niemi, a marine systems biologist with Canada’s Department of Fisheries and Oceans. According to the assessment, only about 40% of species in the Canada Basin region of the Arctic Ocean have yet been identified.

Some changes, however, are evident—like the chemistry of the water. “It’s 33% less salty than in 2003 and about 30% more acidic—enough to dissolve the shells of some small mollusks,” reports CP. Then there is the fact that the Beaufort Gyre, “a vast circular current that has alternated direction every decade,” has not reversed in 19 years, a stagnation that means the “nutrient-rich water from the Pacific Ocean isn’t getting mixed in as it used to, which affects the plankton blooms that anchor the Arctic food web.”

Also apparent: warming water, and sea ice that is both thinning and shrinking. Together, these trends have impacts that are reverberating throughout the food chain, all the way up to the Inuit communities that depend on that chain for their survival.

“Shorelines are on the move. Erosion has more than doubled in the last few decades,” writes CP. The mix of sea life within the ocean is changing, as well, as marine mammals and fish species migrate with rising water temperatures,

Despite the serious findings, the report does not offer conclusions, as the scientists involved are “hamstrung by a lack of long-term data all over the North.” Acknowledging the urgent desire of resident Inuit communities to gain a “holistic view” of what is happening in their polar homeland, Niemi told CP the dearth of baseline knowledge is leaving everyone “just handcuffed sometimes to provide the mechanisms behind the changes.”