Some leaked US methane ‘is double official figure’ 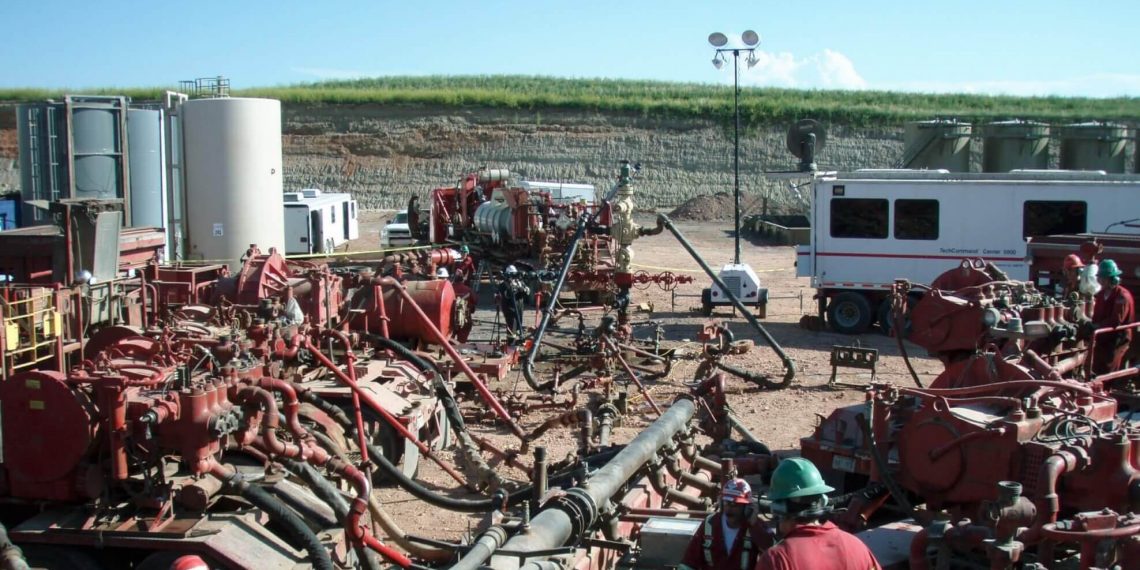 Fracking under way: Methane is judged “a super-pollutant”

This story originally appeared in InsideClimate News, and is republished here as part of Covering Climate Now, a global journalism collaboration strengthening coverage of the climate story.

The leaked methane is a byproduct of fracking for oil, often burned off or simply emitted instead of captured for use as fuel.

NEW YORK, 25 April, 2020 − Methane emissions from the Permian basin of West Texas and southeastern New Mexico, one of the largest oil-producing regions in the world, are more than twice as high as US federal estimates, a new study suggests.

The findings, published recently in the journal Science Advances, reaffirm the results of a recently released assessment and further call into question the climate benefits of natural gas.

Using hydraulic fracturing, energy companies have increased oil production to unprecedented levels in the Permian basin in recent years.
Methane, or natural gas, has historically been viewed as an unwanted byproduct to be flared, a practice in which methane is burned instead of emitted into the atmosphere, or vented by oil producers in the region.

While new natural gas pipelines are being built to bring the gas to market, pipeline capacity and the low price of natural gas has created little incentive to reduce methane emissions.

Daniel Jacob, a professor of atmospheric chemistry and environmental engineering at Harvard University and a co-author of the study, said methane emissions in the Permian are “the largest source ever observed in an oil and gas field.”

He added, “There has been a big ramp up in oil production in that region and when you don’t care too much about recovering the natural gas, it makes for a large emission.”

As a global oil glut threatens to curtail oil production in the region, it remains unclear if methane emissions from the Permian will diminish, or if emissions will continue to climb, as operators scale back monitoring and maintenance operations during the coronavirus pandemic.

“There is going to be a lot less wells being drilled, probably less gas being flared, even wells [that] will [probably] be shut in,” said David Lyon, a scientist with the Environmental Defense Fund and a co-author of the study.

“If that is done properly, then I think you will have less emissions. At the same time, I wouldn’t be surprised if a lot of operators cut back on their environmental staff and they do less leak inspections and other activities that would reduce emissions. They may have less ability to respond to malfunctions and things that cause emissions.”

The current study estimates 3.7% of all the methane produced from wells in the Permian basin is emitted, unburned, into the atmosphere. That is more than twice the official EPA estimate for the region.

While the percentage may seem small, methane is a super-pollutant that is approximately 84 times more potent as a greenhouse gas than carbon dioxide. It is often called a “short-lived climate pollutant” because it lasts only 12 years in the atmosphere when carbon dioxide can last for centuries.

Methane’s relatively short life in the atmosphere means that any reduction in methane emissions will have a near-term benefit in helping to slow climate change.

Climate scientists estimate that if just 3.2% of all the gas brought above ground at the well leaks into the atmosphere, rather than being burned to generate electricity, natural gas becomes, as a result, worse for the climate than burning coal.

The study was based on 11 months of data from the European Space Agency’s Tropospheric Monitoring Instrument (TROPOMI) collected during 2018 and 2019. TROPOMI is a space-based spectrometer that uses infrared imaging to detect the average concentration of methane in columns of the atmosphere averaged across approximately 4 mile by 4 mile sections of the Earth’s surface.

Launched aboard a European Space Agency satellite in 2017, the device has significantly enhanced researchers’ ability to quantify methane emissions across regions like the Permian basin.

The study also draws on data from a U.S. National Oceanic and Atmospheric Administration satellite that detects heat from gas flaring and thereby pinpoints the location of oil and gas wells. When the data from the two different satellites are combined, they show that areas with a high number of wells correspond to areas with high methane concentrations.

“That is important because it adds further confirmation that the high methane concentrations observed in the Permian stem from emissions from oil and gas production,” said Riley Duren, a research scientist at the University of Arizona and an engineering fellow at NASA’s Jet Propulsion Laboratory, who was not involved in the new study.

The findings confirm data released by the Environmental Defense Fund on April 7 as part of its ongoing PermianMAP project. Drawing on airplane monitoring data, the group concluded that 3.5% of methane produced in the Permian was leaking or being intentionally vented into the atmosphere.

The recent report and current study come as EDF and others allege that changes in how the EPA estimates methane releases from oil and gas field facilities has decreased the agency’s official emissions estimates, as they appear in its recently released 2020 inventory of greenhouse gas emissions.

“America’s natural gas and oil companies have initiated multiple initiatives across the U.S. to build upon the progress we’ve made to reduce emissions”

American Petroleum Institute senior counselor Howard Feldman, who was also asked to comment on the new study, said, “As with any report, we will review the methods that Harvard used to validate the data and their conclusions.”

Feldman said that methane emissions are declining. “America’s natural gas and oil companies,” he said, “have initiated multiple initiatives across the U.S., like The Environmental Partnership and the Texas Methane and Flaring Coalition, to build upon the progress we’ve made to reduce emissions in producing basins like the Permian, during a period of significant oil and natural gas production growth.”

Exxon Mobil Corp. announced earlier this month that it is conducting field trials of various methane detection technologies, including satellite and aerial surveillance monitoring of nearly 1,000 sites across the Permian basin, to further reduce methane emissions.

In 2018, Exxon, as part of a coalition of oil and gas producers known as the Oil and Gas Climate Initiative, pledged to reduce methane emissions from a 2017 baseline of 0.32% to 0.25% by 2025. The current study’s basin-wide estimate of a 3.7% rate of emissions suggests that, at least in the Permian, Exxon and other producers are well off of their emission reduction targets.

An April 6 report by the Norwegian energy research firm Rystad Energy noted that flaring in the Permian has decreased from a high of nearly 900 million cubic feet per day in the third quarter of 2019 to approximately 700 million cubic feet per day in the first quarter of 2020. The firm projects that flaring will continue to decline by an additional 40% this year as an oil production downturn caused by Covid-19 and the ongoing oil price war continues.

Flaring significantly reduces methane’s greenhouse gas impact. When methane is burned, carbon dioxide is released into the atmosphere instead of methane. Reductions in flaring are typically an indicator that less methane is being wasted and that more of it is being shipped to market via pipelines.

Flaring, however, isn’t entirely effective. Flares that aren’t operating properly result in incomplete combustion, and the portion of methane that isn’t burned by the flare is released into the atmosphere. In other cases, unlit flares allow all the methane that passes through them to vent, unburned, into the air.

Earthworks, an environmental advocacy group, argues that a steady increase in unlit gas flares  may offset any benefits from the decreasing volume of flared gas. Field measurements of approximately 100 flares in the Permian basin by the group show that the phenomenon of unlit flares increased from 14% of all flares monitored in 2017 to 34% in 2020, according to an April 6 report by the group.

Sharon Wilson, a gas imaging specialist for Earthworks, said she anticipates unlit flaring to increase as financial pressure, work restrictions imposed by Covid-19 and the inability of environmental watchdogs to continue field observations, results in decreased maintenance of existing flares. “At the moment I’m afraid there is all manner of mayhem happening out there,” Wilson said.

EDF is now conducting a larger study of unlit wells or wells with incomplete combustion and plans to release its findings in the coming weeks. State regulators in Texas are also considering whether to mandate a reduction or “proration” in the state’s oil production, as supply outstrips demand.

EDF is urging the state’s Railroad Commission, which regulates oil production, to include mandatory reductions in flaring as part of any requirement to reduce oil production.

“The goal of having flaring as part of proration would be to reduce the volume of gas being flared in the basin,” Colin Leyden, a senior manager for regulatory and legislative affairs at EDF said. “Obviously with less flares you’d have less chance of things going wrong.” − InsideClimate News

It's a galloping goodbye to Europe's coal