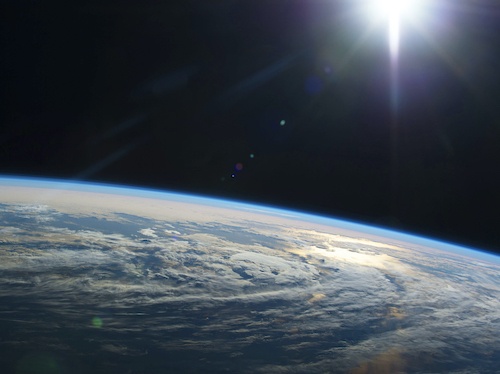 The online universe lit up yesterday with an avalanche of webinars, news stories, email appeals, and at least one week-long global, virtual conference as millions of people around the world found ways to celebrate Earth Day 50 while sheltering at home.

“Picture the biggest protest you’ve ever seen,” wrote Grist reporter Kate Yoder, in the days leading up to the big event. “Crowds stretch on for miles between downtown skyscrapers on streets normally bustling with cars. From a birds-eye view, the moving bodies form a glittering mosaic. Zoom in, and the mass of chanting people brims with bright signs and unmistakable enthusiasm.”

But thanks to the coronavirus, “that scene can only happen in our imaginations for now. A march was part of the original plan for Earth Day’s 50th anniversary this week, planned in tandem with the March for Science NYC, along with workshops, talks, live concerts, and more. But in the middle of a pandemic, few things are proceeding as planned. And so like everything else these days, the Earth Day happenings are going digital.”

But Yoder pointed to one aspect of the day—the yardstick for success—that remains unchanged. “For lasting political change, it’s what happens afterward that matters — whether people stay involved and committed to the cause.” In the U.S., that includes election preparedness and get-out-the-vote operations that March for Science NYC has been running since 2017. [Let’s synchronize our countdown apps—just 193 sleeps to go!—Ed.]

Earth Day 50 hosted a livestream to mark the day, while in Helsinki, global climate network We Don’t Have Time ran the third segment of a tightly-sequenced, six-day virtual conference. The main event runs through tomorrow, with a climate hackathon scheduled for Saturday.

“Fifty years ago, 20 million people took to the streets for the sake of the environment,” the network says. “It was the world’s first Earth Day. This year, for the Earth Day 50th anniversary, millions will rise again…and this time change is inevitable.”

To mark Earth Day, countless global luminaries weighed in to stress the urgency of the health, climate, biodiversity, and economic justice crises facing humanity, and the interactions between them. “The impact of the coronavirus is both immediate and dreadful,” said United Nations Secretary General António Guterres, who’s made the climate crisis his top priority since taking office in 2017. While the pandemic is “the biggest test the world has faced since the Second World War,” he added, “there is another, deep emergency—the planet’s unfolding environmental crisis.”

In a message that some U.S. media interpreted as a challenge to the Trump administration, Guterres “called on countries to make sure their coronavirus recovery plans also paved the way for a more sustainable way of life,” EcoWatch reports. “The current crisis is an unprecedented wake-up call,” he said. “We need to turn the recovery into a real opportunity to do things right for the future.”

Guterres presented a six-point plan for a green recovery that included:

In the U.S., Earth Day founder Denis Hayes connected the dots between the two crises, pointing to the failure of the administration currently occupying the White House “to effectively deal with either one,” the New York Times reports. “COVID-19 robbed us of Earth Day this year,” Hayes wrote for the Seattle Times. “ So let’s make Election Day Earth Day.”

“The power of activism to spark political change was at the core of the first Earth Day,” recalls Times reporter John Schwartz, who was then a Grade 8 student in Texas. “Some 20 million people across the United States, from thousands of schools, colleges, universities, and communities, took part in demonstrations, marches, environmental cleanups, and even a mock trial of automobiles that ended in smashing a car with sledgehammers. New York City closed down parts of Fifth Avenue and 14th Street for its celebration.”

The “enormous turnout” amounted to one-tenth of the U.S. population, “and the enthusiasm for change led to unprecedented action from the federal government,” Schwartz adds. “Congress passed the Clean Air Act, the Clean Water Act, and the Endangered Species Act, and President Richard M. Nixon, a Republican, created the Environmental Protection Agency.”

Among the endless cascade of announcements and events, resources and encouragement yesterday, NBC News announced that it is joining the Covering Climate Now collaboration, along with its partner networks MSNBC and Noticias Telemundo. “Now more than ever, it is important to cover one of the most pressing issues in our lifetimes,” said weathercaster Al Roker, who also leads NBC’s Climate Unit.  “Climate issues are real, and what we will provide are real facts from real scientists so people can make choices and decisions for themselves.”

Zero Hour founder Jamie Margolin, whose student movement received start-up funding from Hayes’ Bullitt Foundation, published her step-by-step guide to becoming a climate activist. And science fiction visionary Kim Stanley Robinson put forward a bold plan for “carbon quantitative easing”, in which “everyone on Earth could be paid for doing good work for the biosphere”.