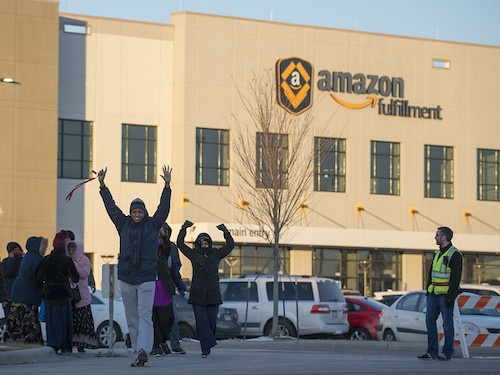 Two Amazon employees who risked their jobs by publicly criticizing the company’s climate credentials—and demanding better from their employer—have been fired in the wake of their equally public support for warehouse workers demanding stronger COVID-19 protections.

An Amazon spokesperson has confirmed that “user experience designers Emily Cunningham and Maren Costa had been fired for ‘repeatedly violating internal policies’,” The Hill writes. The online retail behemoth “did not immediately respond to questions about what policies were violated.”

Costa had made offers on Twitter to match donations given to help Amazon workers in the face of the COVID-19 crisis, “saying the help was needed while the workers ‘struggle to get consistent, sufficient protections and procedures from our employer’,” the paper reports. Her firing comes three months after she was threatened with disciplinary action, up to and including dismissal, for her efforts to hold her employer more accountable for its climate impacts as part of her advocacy work with Amazon Employees for Climate Justice.

Cunningham, a member of the climate action group, had also pledged to match donations for Amazon employees. Her offer included “up to $500 for warehouse workers, whom she said are at risk because of a ‘lack of safe and sanitary working conditions’.”