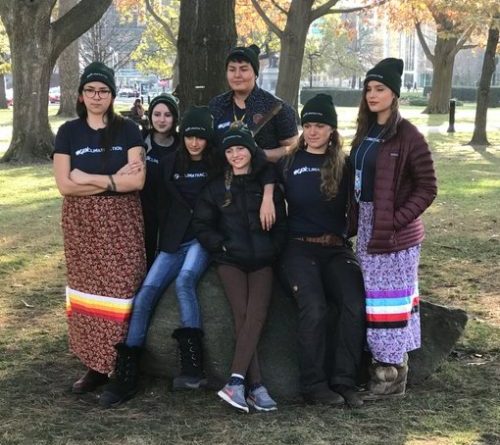 The Ontario government is asking a judge to dismiss a Charter of Rights and Freedoms case filed last November by seven youth climate litigants, claiming the matter shouldn’t be decided in court.

Last November, the seven campaigners—Sophia Mathur of Sudbury, Zoe Keary-Matzner of Toronto, Shaelyn Wabegijig of Rama First Nation, near Orillia, Shelby Gagnonof Thunder Bay, Alex Neufeldt of Ottawa, Madison Dyck of Thunder Bay, and Beze Gray of Aamjiwnaang First Nation—launched their suit against the Doug Ford government for “tearing up the province’s climate laws and violating their Charter rights to life, liberty, and security of the person,” Ecojustice said at the time.

Now, the Ministry of the Attorney General is asking the province’s Superior Court of Justice to reject the case without hearing it. “The Ministry can confirm the motion materials were served on applicants’ counsel,” a spokesperson told CTV News. “Ontario’s position is that it is plain and obvious that the application will fail, as the issues raised are not matters that should be dealt with in court.”

The provincial motion will be heard in July if court schedules aren’t further delayed by the coronavirus crisis.

“The Ford government’s weakening of Ontario’s 2030 target will allow significantly more greenhouse gas emissions to be emitted,” Ecojustice said in a release. “This will worsen the climate emergency and contribute to dangerous climate change-related impacts such as heat waves, floods, fires, and poor air quality that will harm the health of people throughout Ontario.”

Ecojustice is running a petition for the case here.

Sudbury climate campaigner Sophia Mathur said she’d been expecting a fight. “When we first started this case, I said I thought Doug Ford was going to be scared,” and “I think he’s scared that the public is going to start hearing this case out and understanding that the Ford government isn’t taking enough action,” she told CTV. The provincial motion “motivates me,” she added, “because now we’re going to court, and now this case is going to get more attention and more people are going to hear about it. I know the people of Ontario care about the climate crisis, and that a lot of people want our case to go on and they want us to win.”