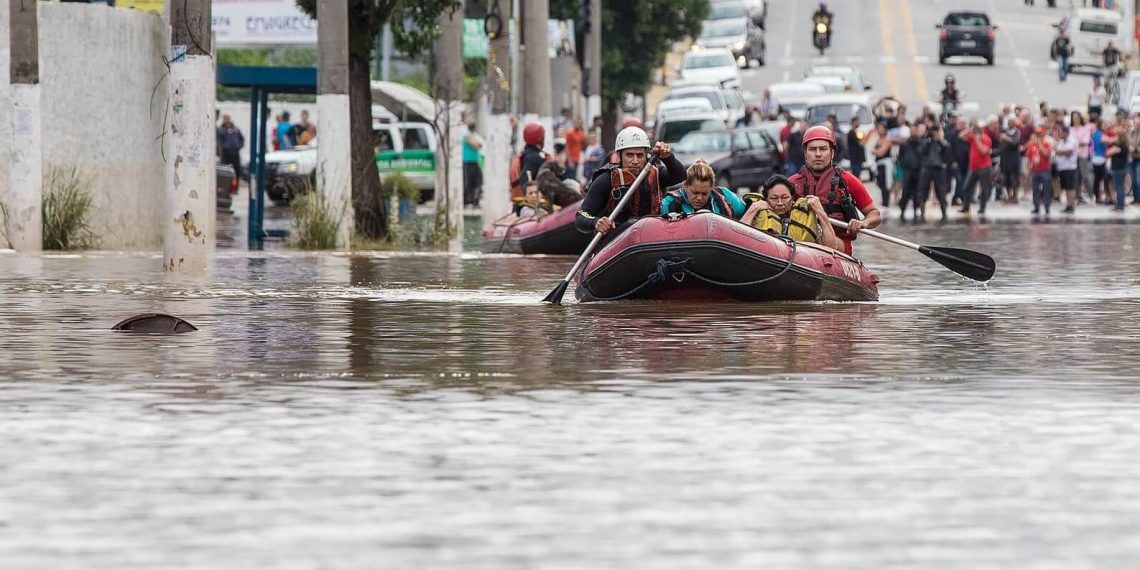 LONDON, 16 April, 2020 – Violent weather is on the rise. Days of exceptionally heavy rain in São Paulo, Brazil, have multiplied fourfold in one lifetime. In California, autumns have become hotter, and drier, and the risk of devastating wildfires is on the increase.

And climate extremes bring with them the risk of ever-greater political conflict. In those countries already politically unstable, one third of all episodes of conflict have started within seven days of a heat wave, landslide, storm or drought.

Climate scientists began warning almost 40 years ago that even a small rise in the average annual temperature of planet Earth would be accompanied by a greater frequency of ever more extreme weather events. And now, repeatedly, rainfall, wind speed and thermometer records have begun to provide supporting evidence.

Seventy years ago, any heavy rain – more than 50 mm in a day – in São Paulo was almost unknown. In February 2020, the floods arrived again when the skies opened and delivered 114 millimetres in 24 hours. This was the second highest measured rainfall in any day since 1943. In the last decade, São Paulo citizens have seen such days between two and five times a year.

He and colleagues report in the Annals of the New York Academy of Sciences that the city’s dry season from April to September is now extended to October. The number of consecutive days without any rain has also increased.

But total rainfall has increased over the city, and the state of São Paulo has now recorded a third of all Brazil’s floods. The researchers do not rule out the possibility of natural climate variation, but it may also be related to global warming and to the growth of the city.

Californian scientists however are in no doubt that the risk of longer and more dangerous fire seasons can be linked to climate change driven by global heating, fuelled in turn by greenhouse gas emissions from profligate use of fossil fuels.

They report in the journal Environmental Research Letters that since the early 1980s the frequency of autumn days with extreme fire weather conditions has more than doubled in California, and rainfall during autumn has dropped by 30%, while average temperatures have increased by more than 1°C.

“Climate change makes tense social and political situations even worse, so climate-related disasters may act like a threat multiplier for violent conflicts”

The region’s single deadliest wildfire, the two largest wildfires and the two most destructive wildfires all happened during 2017 and 2018. More than 150 people died. Damage costs reached $50bn.

“Many factors influence wildfire risk, but this study shows that long-term warming, coupled with decreasing autumn precipitation, is already increasing the odds of the kinds of extreme fire weather conditions that have proved so destructive in northern and southern California in recent years,” said Noah Diffenbaugh of Stanford University, one of the researchers.

The bushfires that have devastated eastern Australia since last September are unlikely to spark any civil war, says Tobias Ide of the University of Melbourne. “But when it comes to droughts in Nigeria or storms in Pakistan, where you have large marginalised populations and little state presence, the picture may well change.”

He and colleagues in Germany report in the journal Global Environmental Change that they used a new statistical approach to confirm what other researchers have repeatedly proposed: that climate catastrophe can seemingly heighten the chance of political violence or civil war.

They counted 176 conflicts in which at least 25 people had died in battle,
and more than 10,000 records of floods, storms, drought, heat wave, landslide and other weather-related phenomena, and found that almost one third of all conflict had been preceded by a climate-related disaster within seven days.

They don’t say the disaster caused the conflict: just that it made violence in already uneasy political conditions more likely.

“Only countries with large populations, the political exclusion of ethnic groups and relatively low levels of economic development, are susceptible to disaster-conflict links.