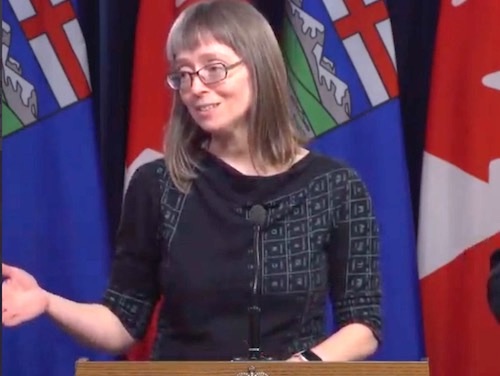 The Alberta government is maintaining that the Kearl Lake tar sands/oil sands complex 70 kilometres north of Fort McMurray must remain open as an essential service, after three workers tested positive for COVID-19 and six others went into isolation pending test results.

“Simply shutting down those camps … sounds a lot easier than it actually is,” Premier Jason Kenney told media yesterday, after Chief Medical Officer of Health Dr. Deena Hinshaw announced the test results at her daily briefing.

“It is very clear to the government that the operation of those plants is an essential service,” Kenney said. “But at the same time, that every possible protocol must be taken to ensure their safe operation.”

He added that a steam-assisted gravity drainage (SAGD) system like Kearl Lake, jointly owned by ExxonMobil and its subsidiary Imperial Oil, needs at least a minimum crew to operate. “Without that basic crew the companies would have to shut the plants down, which in some cases could cause permanent damage to the reservoir and jeopardize billions of dollars of assets,” CBC explains.

“So this is not something that we can take lightly,” Kenney sad. “The enormous economic long-term risk of simply, by fiat…shutting down SAGD projects in particular could be devastating to the province for years to come.” So “our preference instead is to mitigate risk on the public health side with the measures that we are taking.”

Alberta Health Services “continues to work closely with the company to implement outbreak procedures at the site and to minimize any risk of transmission,” Hinshaw told the briefing. “These procedures include appropriate cleaning and infection prevention, as well as continued emphasis on following my guidelines for managers and operators of industrial work camps.” She acknowledged Kearl Lake managers, nearby camp operators, and their staff “for their continued diligence to keep these camps functional and contributing to Alberta’s economy positively during a very challenging time.”

Imperial Oil said one of the workers with a confirmed diagnosis is still at Kearl Lake, while others have already left the camp. “The employee reported symptoms last week and was immediately isolated at the camp, in accordance with Alberta Health Services (AHS) guidelines,” the company said in a statement.

“Over the past several weeks, as we have been actively taking precautions and monitoring our work force, a very small number [of] employees have tested positive during days away from site and have isolated themselves,” it added. Now, “our focus remains on ensuring the safety and health of our entire work force, their families, and their communities. We are committed to taking all measures to prevent further spread within our work force.”

Regional Municipality of Wood Buffalo Mayor Don Scott, who’s previously expressed concern about COVID-19 transmission at tar sands/oil sands “man camps” and about the camps themselves, said it was “a step in the right direction” to make the cases public.

“The health and well-being of those who live and work in our region remains my paramount concern,” he said in a statement. “I believe that public awareness of cases in our region will help us respond appropriately.”

Scott Davis, Wood Buffalo’s director of emergency management, said the region can expect to see more cases in the weeks ahead, but maintained the situation is under control. “I understand that the news of an outbreak of COVID-19 at Kearl Lake is troubling to hear,” he said in a statement. “But I want to assure you that we are well positioned as a region to deal with these cases.”