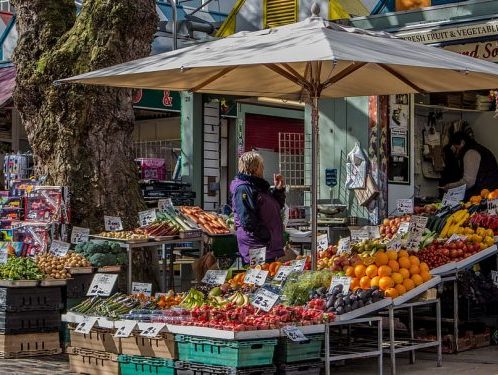 With the COVID-19 pandemic manifesting as an economic nightmare as well as a health crisis, food security groups in the UK are urging policy-makers to make clear that local food markets must stay open so that vulnerable populations do not go hungry.

In Southwark, Hackney, Liverpool, and “up and down the country,” local food markets are closing, writes Ben Reynolds, deputy CEO of the UK’s Sustain Alliance for Better Food and Farming, in a report republished by Resilience.org. While low turnout is driving some of the closures, most are the result of “landowners not allowing markets to continue trading on the grounds of potential risks” related to crowds.

While the caution is an “understandable reaction” and appropriate to efforts to adhere to social distancing imperatives, says Reynolds, “such closures also go against a more fundamental principle that people need to eat, and perhaps demonstrate a lack of consideration of the knock-on effects on people’s ability to find food.” Many in the UK are unable to get to “out of town megamarkets” or even to afford the fresh food that is available in other types of retail stores. “The closure of local food markets will now exacerbate their poverty and hunger,” he writes.

And in many cases, notes Reynolds, the closures are being driven by perceived, rather than proven risk—as well a “lack of desire” or other motivators to keep the markets open. “Does a responsibly run outdoor market visited by a few hundred people across a day really present a greater potential risk to public health than a supermarket visited by many thousands?” he asks.

Supporters of outdoor markets are rallying, however, and “finding their voice to talk to landowners, councillors, police forces, and government policy-makers, to give them the confidence that markets can be run safely and play a vital role in helping to feed the nation.” Many markets have already taken it upon themselves to institute responsible operating procedures, such as reducing the number of vendors to provide more space, or hiring extra stewards to support social distancing.

Still others are “finding new ways to trade, often delivering food to people’s doors, which has never been needed more.”

As critical as the local markets are to providing food for vulnerable people during this time of crisis, Reynolds also urges policy-makers and the public to understand that “supporting these small businesses is vital for maintaining diversity and resilience” in the UK’s food system.

“Supermarkets will weather, and even greatly profit from, this storm. Small businesses are more likely to fail, never to return,” he observes.

“The short-term gains from this system that have been made on prices may come back to haunt us sooner rather than later,” Reynolds adds. “The best remedy right now is to help keep smaller food businesses afloat, and markets, if run safely, are a vital part of this medicine.”