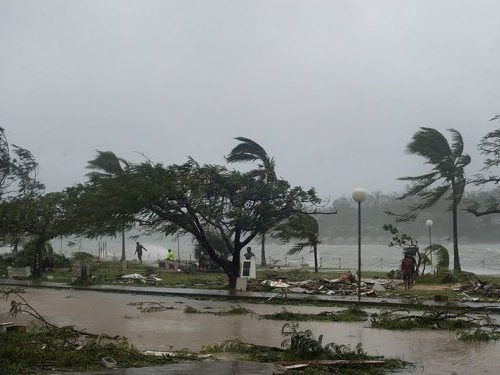 A Category 5 cyclone hit the South Pacific island state of Vanuatu Monday, with the country’s 276,000 residents already under travel restrictions to prevent the spread of the coronavirus.

“Cyclone Harold approached Sanma province, an island north of the capital Port Vila, with winds of up to 215 kilometres (133 miles) per hour about 1:00 PM local time, as the country of 276,000 people bunkered down,” attaining Category 5 status as it approached landfall, Reuters reports. The storm was expected to reach Port Vila overnight.

While the country has not reported any cases of the coronavirus, it’s under a state of emergency that is now hampering post-storm aid efforts. “There is lots of damage in Sanma, they lost lots of buildings,” said Vanuatu Red Cross CEO Jacqueline de Gaillande. “We don’t know if we can provide any supports to the island because we are not allowed to travel inter-island, and we are waiting for the government to make that decision.”

The Australian Broadcasting Corporation “reported that Vanuatu officials had relaxed social distancing rules over the weekend because of concern about the cyclone,” Reuters says. “A day earlier, Solomon Islands police said they retrieved five bodies in their search for 27 people who were swept off a ferry by the cyclone as it passed over the country.”