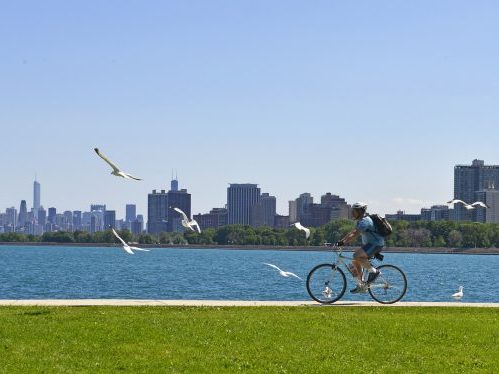 Chicago city planners looking to help their citizens keep fit during the pandemic—mentally as well as physically—are being encouraged to close streets to cars and open them up to cyclists and pedestrians, thereby taking a step forward to a climate-friendly world more favourable to transit, bike lanes, and walking.

The car-free streets that many urban residents have been or will soon be experiencing during the pandemic could also trigger a broad-scale epiphany, writes Streetsblog Chicago. Those roomy, now-quiet roads reveal just how much we have given over to “this space- and energy-inefficient mode, which normally makes our city more dangerous, polluted, and congested.”

Following the lead of cities like New York and Philadelphia and closing some streets to cars would not just immediately benefit individuals and families who need more space to keep their distance from others, while weathering the strain of social isolation, Streetsblog says. It’s also a golden opportunity to rethink the layout of the city’s streets, for the good of both people and planet.

“Just as the city of Chicago and state of Illinois are listening to scientists when it comes to COVID-19, we must do the same when it comes to experts who specialize in climate change,” writes self-styled “biking and transit visionary” Courtney Cobbs. City officials are currently “more apt to listen to drivers’ complaints when it comes to repurposing travel lanes to create more people-friendly streets, bus lanes, and physically protected bike lanes.”

Getting apprehensive people out of their emissions-belching cars and safely on their way in a bike lane isn’t rocket science, Cobbs states, adding that much of the current reluctance to replace cars with bikes is driven by fear—whether it’s a general fear of change, or the more specific dread of being “doored” or run over. “We just have to make it easier, safer, and more attractive to use active transportation, make drivers pay for the true cost of driving, and use land efficiently.”

In Chicago, that would mean “roll[ing] out at least 25 miles of bus lanes in 2020,” replacing “free on-street parking with bus and/or protected bike lanes,” narrowing travel lanes to discourage speeding, and installing “transit-friendly stoplights at key intersections”.

Windy City residents have the power to promote this kind of change themselves, Cobbs concludes. “If you know of a street within your ward that could easily be turned into a car-free street for people during the pandemic and possibly beyond, write your alderman and let him or her know our current sidewalk widths make practicing social distancing difficult,” she writes.

Renewables Delivered Nearly 75% of New Electricity Last Year, But Investment Must Double by 2030