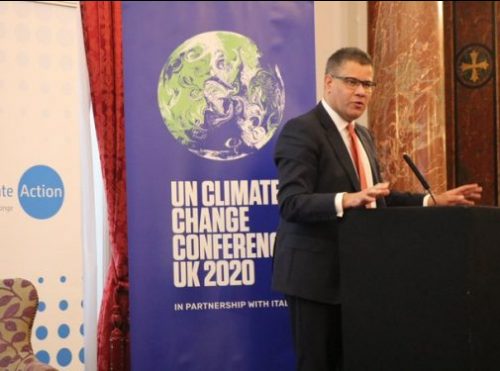 The United Nations has postponed this year’s global climate change conference, COP 26, to the middle of next year due to the COVID-19 pandemic.

The crucial talks were originally on track to bring 30,000 participants for 195 countries to Glasgow, Scotland to hammer out tougher national commitments to confront the climate crisis. But now, “the world is currently facing an unprecedented global challenge, and countries are rightly focusing their efforts on saving lives and fighting COVID-19,” the UK’s COP 26 president-designate, Alok Sharma, said in a statement. “That is why we have decided to reschedule COP 26.”

The statement said new dates for the COP would be set in consultation with participating parties. The UN also postponed mid-year negotiations, normally held in May, to the first half of October.

Climate Home News says the announcement “will give some clarity to governments and diplomats who have been waiting to know the impact of the pandemic on this year’s climate timetable,” while allowing time for more countries to develop more ambitious carbon reduction targets—even though they’re now necessarily focused on the pandemic. Tenzin Wangmo of Bhutan, lead negotiator for the Least Developed Countries (LDC) negotiating bloc, said most countries had only begun developing their updated plans when the coronavirus became their sole preoccupation. “It’s going to be tough to submit climate plans this year,” agreed Carlos Fuller of Belize, lead negotiator for the Alliance of Small Island States.

Though the end-of-year deadline for updated Nationally Determined Contributions (NDC) under the Paris Agreement  is based on the calendar, not the COP schedule, “so far, only four countries—the Marshall Islands, Suriname, Norway, and Moldova—have submitted more ambitious climate plans to the UN. On Monday, Japan became the first G7 country to submit an updated plan, but it merely reaffirmed its existing 2030 goal, set in 2015,” Climate Home writes. “If the talks are postponed well into 2021, governments will also have what is likely to be a bleak report about the mounting risks of global warming from the UN’s Intergovernmental Panel on Climate Change (IPCC), due to be published in mid-April.”

The postponement “also means governments around the world will have more time to assess the likely stark impact of the U.S. presidential election, on November 3, on global efforts to avert more heat waves, wildfires and rising sea levels,” Climate Home adds. “The U.S. will formally leave the Paris Agreement on November 4,” but “a Democratic victory would make the U.S. a leading voice for climate action at the postponed COP 26,” as opposed to being “a mere observer if Trump wins a second term”.

Even as they announced the postponement, key officials stressed the need to keep the momentum going on implementation of the 2015 Paris deal.

“Soon, economies will restart. This is a chance for nations to recover better, to include the most vulnerable in those plans, and a chance to shape the 21st century economy in ways that are clean, green, healthy, just, safe, and more resilient,” Espinosa said.

Postponing the COP “is the right thing to do” because “public health and safety must come first now,” said European Climate Foundation CEO Laurence Tubiana. But “I think we have to be innovative in the way we keep the momentum going,” shifting “from a diplomacy only focused on UN Climate Change” to using post-COVID economic stimulus packages to help accelerate the transition off carbon.