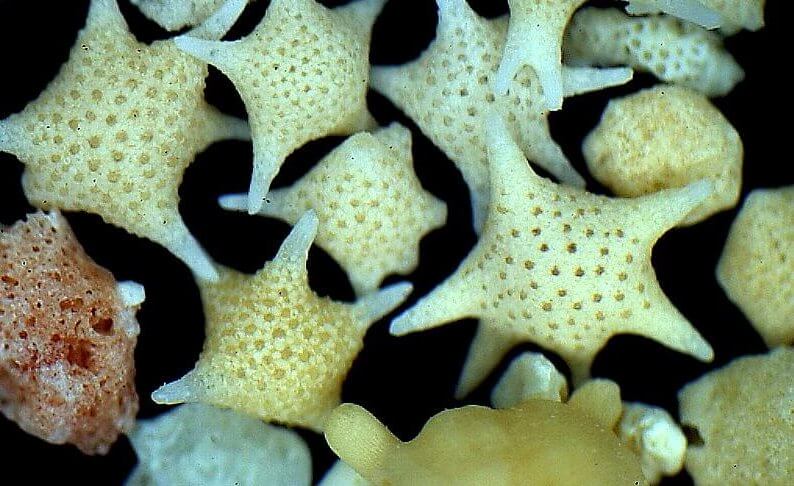 Foraminifera remains carry the signature of ocean change. Image: By labormikro from Deutschland

Global heating can stop the flow of Europe’s warm water from the tropics. Happening often during the Ice Ages, it could soon recur.

LONDON, 1 April, 2020 – Oceanographers have confirmed once again that global heating could slow or shut down the flow of currents such as the Gulf Stream, ending northern Europe’s warm water supply with an unexpected and prolonged cold snap.

This time the confidence is based neither on ocean measurements made now, nor complex computer simulations of the future. There is fresh evidence from the sea floor that such an ocean shutdown happened many times in the last half a million years of Ice Ages.

The Gulf Stream is part of a much larger flow of water called the Atlantic Meridional Overturning Circulation, an ocean recycling system that both nourishes marine life and moderates the climate in two hemispheres.

For the last 10,000 years of human history, tropical water has flowed north from the Caribbean and equatorial regions and washed the shores of Europe as far north as Norway, bringing equatorial heat to soften the impact of European winters.

A former UK chief scientist once calculated that the Gulf Stream delivered the warmth of 27,000 power stations and kept Britain about 5°C warmer than its citizens had any right to expect, given the latitude at which they lived.

“These findings suggest that our climate system, which depends greatly on deep ocean circulation, is critically poised near a tipping point for abrupt disruptions”

But as that stretch of the Gulf Stream known to oceanographers as the North Atlantic drift current reaches the Greenland Sea it becomes increasingly colder and saltier and thus more dense, and sinks to the ocean floor, loaded with dissolved atmospheric carbon dioxide and oxygen, to become a southward flow called the North Atlantic Deepwater formation.

And it also mingles with fresh water melting each summer from the Greenland ice sheet. But as the rate of Arctic melting accelerates, more fresh water will plunge into the same sea, with an increasing probability that it will disrupt the ocean cycle, turn off the flow of warm tropical water, and plunge Europe into a prolonged cold spell.

In its most dramatic form, this hypothesis was the basis for a 2004 Hollywood disaster movie called The Day After Tomorrow. Climate scientists are fairly sure that such an event would not mean the sudden advance of glacial ice over much of Europe and North America. But they have repeatedly identified evidence that the flow of the northward current is beginning to weaken.

And the journal Science now carries additional evidence that the ocean circulation was repeatedly interrupted for periods of a century or more during the warm spells or interglacials that have happened during the last 450,000 years.

The signature of ocean change is there in the tiny sea shells from marine creatures called foraminifera that rain down onto the ocean floor to form annual layers of silent testimony to past climates.

When the mix of carbon isotope ratios preserved in them is high, that is a sign that the Atlantic circulation was once vigorous. When it is low, then this overturning circulation is feeble, or has stopped altogether.

The signal from the deep ocean is that when they happen, these disruptions seem to happen very swiftly, and to linger for 100 years or more. And, the scientists say, these interruptions in the flow of the ocean – and with it, the transport of heat from the tropics – happen more easily than previously appreciated, and they occurred in past climate conditions similar to those the world may soon face.

“These findings suggest that our climate system, which depends greatly on deep ocean circulation, is critically poised near a tipping point for abrupt disruptions,” said Yair Rosenthal of Rutgers University in the US, one of the authors.

“Although the disruptions in circulation and possible coolings may be relatively short-lived – lasting maybe a century or more – the consequences might be large.” – Climate News Network

Cow Belches Give Plant-Based Spreads an Advantage Over Butter