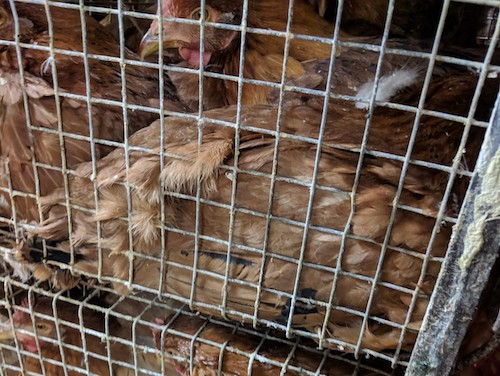 Live animal markets in many countries, including the United States, are one source of novel infections. Photo: Jodie Wiederkehr/Twitter

While the direct response to the COVID-19 pandemic receives the lion’s share of public and media attention, there’s been a steady drumbeat of news and analysis on the similarities between the coronavirus and the climate crisis—and the lessons from today’s crisis that will be applicable when the focus shifts back to climate.

“I believe the last few weeks, as terrible as they have been for so many people, have taught us crucial lessons that we needed to learn in order to enter a new era of radical, collaborative action to cut emissions and slow climate change,” writes former UN climate secretary Christiana Figueres, in a guest post for Time Magazine. “Like everyone else, I can’t believe we’ve learned these five lessons in a matter of days.”

Figueres also points to the key differences between the two crises: while coronavirus transmission is defeated by social isolation, “the climate needs to be tackled through coming together and collaborating. Social distancing measures have caused economic paralysis, while our response to climate change should actually strengthen and improve the economy.”

For UN Environment Programme Executive Director Inger Andersen, meanwhile, the pandemic is a sign that humanity is putting too much pressure on wildlife and nature. The Guardian cites leading scientists, as well, pointing to the coronavirus crisis as a “clear warning shot” that humanity is “playing with fire” with its treatment of the natural world.

“Never before have so many opportunities existed for pathogens to pass from wild and domestic animals to people,” Anderson said, noting that 75% of all emerging infectious diseases come from wildlife. “Our continued erosion of wild spaces has brought us uncomfortably close to animals and plants that harbour diseases that can jump to humans.”

“There are too many pressures at the same time on our natural systems and something has to give,” she added. “We are intimately interconnected with nature, whether we like it or not. If we don’t take care of nature, we can’t take care of ourselves. And as we hurtle towards a population of 10 billion people on this planet, we need to go into this future armed with nature as our strongest ally.”

To get that done and prevent further outbreaks, “both global heating and the destruction of the natural world for farming, mining, and housing have to end, as both drive wildlife into contact with people,” The Guardian adds, citing expert sources.

“The emergence and spread of COVID-19 was not only predictable, it was predicted [in the sense that] there would be another viral emergence from wildlife that would be a public health threat,” said Prof. Andrew Cunningham, deputy director of science at the Zoological Society of London. “It’s almost always a human behaviour that causes it, and there will be more in the future unless we change.”

With fatality rates of 50% for Ebola and 60 to 75% for Nipah virus, “although, you might not think it at the moment, we’ve probably got a bit lucky” with COVID-19, he added, citing live wild animal markets in China and many other countries as one obvious vector for passing animal diseases to human, and modern ease of travel as an amplifier.

“The animals have been transported over large distances and are crammed together into cages. They are stressed and immunosuppressed and excreting whatever pathogens they have in them,” Cunningham told The Guardian. “With people in large numbers in the market and in intimate contact with the body fluids of these animals, you have an ideal mixing bowl for [disease] emergence. If you wanted a scenario to maximize the chances of [transmission], I couldn’t think of a much better way of doing it.”

Meanwhile, some risk modellers are looking at the response to the coronavirus “as a test case for how climate shocks could roil markets and push governments to respond to existential threats,” Bloomberg Green reports.  There are some similarities to climate risk in terms of the speed and scale with which the crisis is materializing, and because this is also an exogenous risk that’s not part of the normal business cycle,” said Jakob Thomä, managing director of the 2° Investing Initiative in Berlin.

Bloomberg also points to some important differences between the two crises: “while long-term climate risks are felt by an entire region in terms of unemployment and economic activity, COVID-19 has a bigger impact on older age groups,” the news outlet writes. “Swift national shutdowns and the expectation that the virus has an end date will also have a dissimilar impact on the economy. But the current crisis highlights something risk modelers do want to spend more time on: the social consequences of climate change.”

Margolin: After Coronavirus Response, Older Generations Must Step Up for Youth