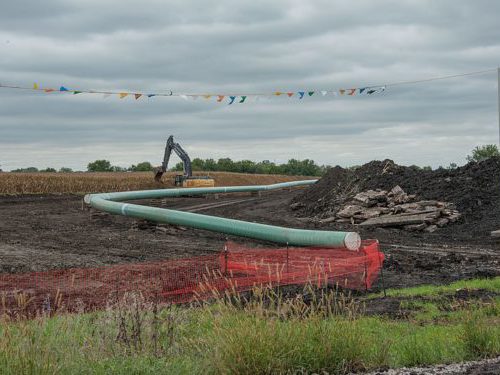 A U.S. federal judge has sent the U.S. Army Corps of Engineers back the drawing board in its review of the fiercely-contested Dakota Access pipeline, after agreeing with the Standing Rock Sioux of North and South Dakota that environmental assessments missed the full impact of the project.

“It remains unclear however, whether the 1,200-mile pipeline, which ships crude oil from North Dakota to Illinois, will have to be shut down during the new assessment by the Corps, a process that could take years,” InsideClimate News reports.

The Army Corps had already completed a supplementary review ordered by Boasberg, InsideClimate says. But on Wednesday, the judge said that study failed to address key concerns about potential pipeline spills. “He gave the Corps the opportunity to fix what was wrong with the environmental assessment and they completely blew it,” said Vermont Law School professor Pat Parenteau. “I don’t think they left Judge Boasberg any choice.”

The next round of hearings will determine whether the pipeline shuts down while the Army Corps tries to get its homework right. In this week’s ruling, the judge said a shutdown would carry “serious consequences that a court should not lightly impose,” and Parenteau said Standing Rock and its allies on the case would face an uphill fight getting that decision. But he didn’t entirely rule it out.

“I would have to assume [Boasberg] is seriously considering that,” Parenteau told ICN.

The pipeline crosses the Missouri River just upstream from the Standing Rock reservation, which drew thousands to international protests that began in 2016, ICN notes. The Trump administration approved the pipeline after it seized power, and construction was complete in June 2017.

But “Standing Rock sued the Army Corps of Engineers in July 2016, arguing that an initial environmental assessment of the project the Corps had approved was inadequate,” writes reporter Phil McKenna. “The Cheyenne River, Oglala, and Yankton Sioux tribes later joined the lawsuit as plaintiffs.”

In the wake of the ruling, the agency “must now complete an Environmental Impact Statement, a detailed assessment of any potential environmental harms that might result from the project, for the portion of the pipeline that crosses beneath Lake Oahe, a dammed section of the Missouri River in North Dakota.”

In his ruling, Boasberg concluded the tribe relies on the lake in “myriad ways,” including “for drinking, agriculture, industry and sacred religious and medicinal practices.”

“After years of commitment to defending our water and earth, we welcome this news of a significant legal win,” responded Standing Rock Tribe Chair Mike Faith in a written statement. “It’s humbling to see how actions we took four years ago to defend our ancestral homeland continue to inspire national conversations about how our choices ultimately affect this planet. Perhaps in the wake of this court ruling the federal government will begin to catch on, too, starting by actually listening to us when we voice our concerns.”

“This validates everything the Tribe has been saying all along about the risk of oil spills to the people of Standing Rock,” added Earthjustice attorney Jan Hasselman, whose organization represented the community in court. “The Obama administration had it right when it moved to deny the permits in 2016, and this is the second time the court has ruled that the government ran afoul of environmental laws when it permitted this pipeline. We will continue to see this through until DAPL has finally been shut down.”