Thunberg in Self-Isolation, Urges Social Distancing to Confront the Pandemic 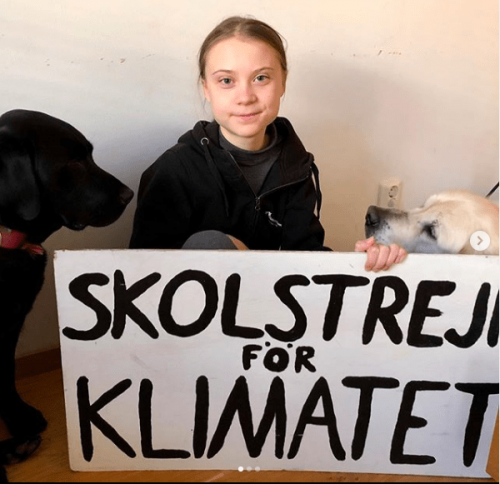 #FridaysforFuture founder Greta Thunberg and her father Svante are both in self-isolation, believing they both may have been infected with the coronavirus during a recent train trip through central Europe, before travel restrictions were imposed.

Thunberg is stressing the importance of social distancing, reporting that her own symptoms are mild, her dad’s a lot less so. Neither of them has been tested, since Sweden is limiting coronavirus tests to people with the most severe symptoms or in at-risk groups. But she said the experience shows how easily the virus can spread when many of the people carrying it are asymptomatic.

“I came home from central Europe and then I isolated myself from the beginning, because I thought I might as well, as I’ve been on trains and so I don’t want to put anyone else at risk,” Thunberg told New Scientist. “But I started feeling some symptoms after a few days. At the same time, my father was feeling much more intense symptoms.”

“I was feeling tired, had shivers, a sore throat, and coughed,” she added on Instagram. “My dad experienced the same symptoms, but much more intense and with a fever.”

Thunberg stressed that everyone has to #StayAtHome and practice social distancing, whether they feel ill or not. “The important thing is, I didn’t basically feel that I was ill. It could be that I was feeling unusually tired, I was coughing a bit,” she said. “That also is very dangerous, because you don’t know you have it. If it wouldn’t have been for my father getting it at the same time and much more intense than me, I might not even have noticed it, that I was sick.”

Thunberg added that she’s pleased with the way the youth climate movement has pivoted in response to the pandemic. “I think people have been very good at that within the movement, respecting each other and people in risk groups,” she said. “Even though we are young and are not primarily the ones targeted by this virus, we still stand in solidarity with those in risk groups, and I think that is a very beautiful thing.”

The coronavirus crisis also shows “that our current societies are unsustainable,” she said. “If one virus can wipe out the entire economy in a matter of weeks and shut down societies, then that is a proof that our societies are not very resilient. It also shows that once we are in an emergency, we can act and we can change our behaviour quickly. And as long as we have solidarity and common sense, we will get through any crisis.”

In Conversation: Green and Just Pandemic Recovery Would Help People Who Are Hurting, Stewart Says