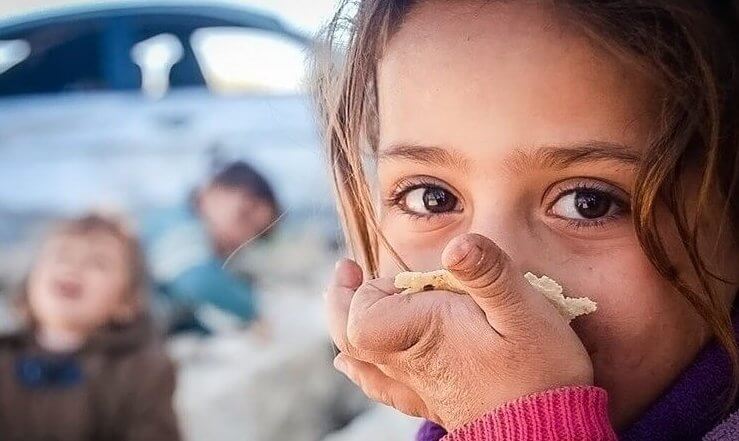 Hunger in Syria: A regional nuclear war could make it a global scourge. Image: By Tasnim News Agency

LONDON, 25 March, 2020 – If a limited nuclear war is not already a contradiction in terms, it could still prove far wider in scope, inflicting global hunger without limit.

US and European scientists have worked out how to dramatically lower planetary temperatures and reduce rainfall. They do not recommend their latest study of explosive geo-engineering as a way of addressing the climate crisis, warning instead that even a very limited nuclear war between two nations could devastate global harvests.

Just possibly, they say, it could claim more lives in the non-combatant nations than in the incinerated cities of the warring states.

“Our results add to the reasons that nuclear weapons must be eliminated because, if they exist, they can be used with tragic consequences for the world,” said Alan Robock of Rutgers University in the US.

“As horrible as the direct effects of nuclear weapons would be, more people could die outside the target areas due to famine.”

Hypothetical studies like this can help illustrate the vulnerability of world food stocks to climate change, the scale on which climate change can and may yet happen, and the difficulties inherent in any attempts at global technofix.

They also demonstrate that – for everybody on the planet – nuclear war of any kind could be a confrontation with no winners.

It is a given among climate scientists that violent volcanic eruptions which hurl sulphate aerosols and soot particles into the stratosphere can suppress global average temperatures over a period of years.

That is why, as greenhouse gas emissions from fossil fuel use build up in the atmosphere, and annual average global temperatures continue to climb, researchers repeatedly revisit the argument for deliberately and systematically darkening the skies to blot out some of the incoming sunlight and reduce global heating.

But again and again, scientists have used their war game models of potential nuclear battle to highlight the hazards of darkening the skies precipitately in a nuclear exchange.

The latest is published in the Proceedings of the National Academy of Sciences and calculates that any encounter that uses less than even 1% of the world’s nuclear arsenal could trigger the worst global food losses in modern history, and disrupt harvests and food trade worldwide for about a decade.

The impact of this would turn out to be even worse than the impact of human-made climate change by the end of the century.

“We now know that nuclear conflict would not be just a terrible tragedy in the region where it happens – it is also an underestimated risk for food security,” said Jonas Jägermeyr of Germany’s Potsdam Institute for Climate Impact Research.

“We find severe losses in agricultural production, but more importantly we evaluate trade repercussions affecting local food availability. It turns out that major breadbasket regions would cut exports, leaving countries worldwide short of supplies. A regional crisis would become global, because we all depend on the same climate system.”

The regional crisis, in this case, would be a nuclear exchange involving perhaps 100 Hiroshima-scale warheads over the most densely populated cities of India and Pakistan, neighbouring states with both nuclear weapons and a history of hostility.

The exchange could put five million tonnes of smoke and soot into the upper atmosphere, where the jet stream winds would start to sweep it around the hemisphere. Global average temperatures would drop by 1.8°C, and rainfall would be reduced by 8% for at least five years.

Fossil fuel combustion over the last two centuries has already warmed the planet by around 1°C, to threaten world harvests. But until now, nobody has calculated the cost of a sudden plunge in temperatures.

The researchers did not factor in the losses in the combatant countries, nor the worldwide damage from radioactive fallout. They just considered the impact on all the other nations that stayed neutral.

In the first year, stocks of maize, wheat, rice and soy in the world’s granaries would buffer the immediate losses. But within four years, global grain stocks would be at almost zero and international trade systems would come to a stop.

Maize and wheat supplies would shrink by at least 20% in more than 70 countries, with about 1.3bn people. By the fourth year, 132 out of 153 countries, home to 5bn people, would experience shortages higher than 10%. Corn production in the US and Canada – source of 40% of all maize – would drop by 17.5% by the fifth year of darkened skies.

And anyone who thinks that at least global warming would have been brought to a halt can think again. After about a decade, the researchers say, global temperatures would again start to surge. – Climate News Network