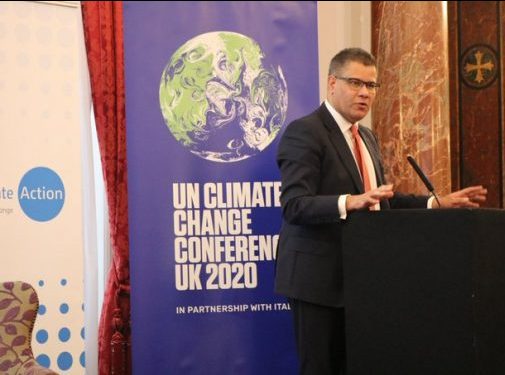 Scarcely seven months before a United Nations conference where countries will be under pressure to agree on fast, decisive action on climate change, the coronavirus pandemic is raising serious questions about whether the event will have to be cancelled—or possibly shifted to an all-virtual gathering.

Even if the current pace of the pandemic is considerably slowed by autumn, COP 26 in its traditional format would still mean gathering 30,000 participants from 195 countries in one place, at a time when the host country—the United Kingdom—is at the “winter crisis” point in its regular flu season.

So even as leading climate specialists urge British Prime Minister Boris Johnson to resist calls to postpone the conference, Foreign Secretary Dominic Raab warned last week it may be a “challenge” to hold the conference as planned. “I can’t give you a cast-iron guarantee, things are moving so quickly,” he told the House of Commons Foreign Affairs Committee. “Obviously it is not until November. We will keep it under close review. We would of course want it to go ahead, but I can’t give you any guarantee on that.”

But while The Guardian reports that “ministers and officials have privately discussed the possibility of postponing the COP 26 talks,” iconic British climate economist Nicholas Stern is warning that any delay would undercut progress on the climate crisis. “At the moment, we must just get on with the preparation,” he said. “This is such an urgent challenge and there is so much to do, and so much valuable work that is being done, that we can’t afford to lose the momentum.”

“We would rather not see it cancelled until we know more about the spread of the virus,” added Power Shift Africa Director Mohamed Adow. “Cancelling it immediately might mean action on climate change gets ignored this year, and people on the frontlines in poorer countries can’t afford that.”

“We cannot afford to lose any momentum,” warned Janine Felson, deputy chair of the Alliance of Small Island States. “We should all focus our energies on ensuring that we can support each other through this trying time and continue to push for ambition.”

“If it is going to be cancelled, that should only be done at the last possible minute – in October,” said former UN climate secretary Yvo de Boer.

But Greenpeace UK is already urging the Johnson government to delay, while a former senior climate negotiator from the United States sees a possible silver lining.

“Postponement is very different to cancellation,” said Greenpeace UK Executive Director John Sauven. “It would be the same president, the same venue, the same two countries co-hosting, so all you are doing is having a slight delay. The UK got off to a slow start” with its COP 26 preparations, he added, “so postponement would give more time for the work that is needed.”

But Richard Black, director of the UK’s Energy and Climate Intelligence Unit, says the prospect of postponing the COP carries “many more ramifications…than meet the casual eye”. If the UK declared that it couldn’t host, any other country could offer to take its place, as Spain did after Chile withdrew in the weeks before COP 25 in Santiago. Black also underscores the importance of this year’s conference, given the momentous decisions and agreements due in 2020 under the Paris Agreement, and the conjunction between two “super-summits”—the COP in November, and the Convention on Biological Diversity in October—taking place “arm-in-arm” in the same year.

While Black acknowledges that “most governments and businesses and indeed citizens won’t have climate change at the top of their priority list in the coming months,” and echoes Bledsoe’s point about the timing of the U.S. election, he says cancellation still isn’t an easy decision. “Every international process like this depends on the ‘big mo’—momentum,” he writes. “Any sense of delay, drift, ennui can be a serious detraction.”

Last week, former UK chief scientific advisor David King suggested COP 26 could be shifted to a virtual format if the “habit of requiring face-to-face meetings can be overcome”. But while King maintained that “all of the action is now taking place virtually and it’s flowing along quite well”, Black told The Independent the idea was “not feasible” and could undercut the benefit of “rich debates” conducted in person.

“To have them all on conference calls when they all need the right to contribute and have private sessions to consult scientists, civil societies, and more—it simply is not feasible,” he asserted. “COP 26 is made up of a rich ecosystem, 30,000-ish people from different walks of life in one place, allowing for the scrutiny of governments and rich debates to be held. It wouldn’t be possible to reduce all that into a video conference call.”