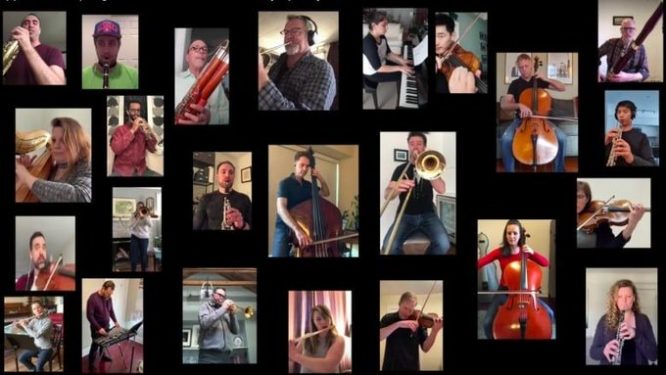 In an isolated world, members of the Toronto Symphony Orchestra are lifting the hearts and minds of 115,000 (and counting) with beautiful music—performed separately, together, from isolation in their homes.

For their virtual performance, the musicians chose a segment from Aaron Copland’s Appalachian Spring, commissioned in 1942 with “a world deep at war,” said principal double bassist Jeffrey Beecher, who coordinated the project.

Orchestras around the world are shuttering, laying off musicians and staff, as part of the effort to slow the coronavirus pandemic. But some of those musicians are determined to find ways to play on, with the 29 members of the TSO deploying their mobile phones, software, and a metronome to perform an uplifting piece of classical music, which they then uploaded to YouTube, writes the Globe and Mail.

“The intent was to offer something of solace,” Beecher explained. “I have felt grief in the losing of connection with my colleagues, and the piece, which moves through so many emotions in a short time, speaks to the moment.”

The pandemic has silenced much of the world of classical music—including New York’s Metropolitan Opera, which “has cancelled the rest of its 2019-20 season and will stop paying its orchestra, chorus, and other unionized employees at the end of the month,” the Globe writes. In Canada, “the Winnipeg Symphony Orchestra and the Calgary Philharmonic Orchestra laid off musicians and staff last week.”

But, through the determination of many musicians, the band will play on. The TSO’s virtual performance has been joined by the Rotterdam Philharmonic Orchestra, which recently posted a video of some of its members “performing Ode to Joy from Beethoven’s Symphony no. 9, playing individually from each of their homes.” At last count, more than a million people had watched the collaboration.

It took 48 hours for Beecher to put together his four-minute video of the TSO performance, but he doesn’t regret the labour (or lost sleep) for a moment.

“People are responding with great ingenuity and creativity to the difficulties of the times,” he told the Globe. “As musicians, pulling together is such an important part of what we do, as an orchestra especially.”