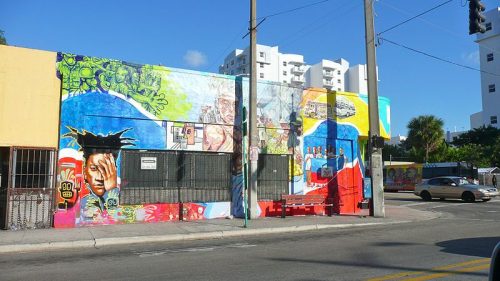 The impoverished but vibrant neighbourhood of Little Haiti in Miami is falling prey to the forces of climate gentrification, as wealthy Floridians begin fleeing their beachfront homes in response to rising sea levels. Anxious to preserve the Haitian soul of their community and keep property values within reach, locals are fighting back.

“In the 1970s and 1980s, thousands of Haitian refugees fleeing the brutal Duvalier dictatorship landed on Florida’s southern shores,” writes Grist. Many of them “settled in Lemon City, an economically disadvantaged Miami neighbourhood north of downtown’s glitz and grit and across Biscayne Bay from South Beach’s famed white sand and aquamarine sea.”

Fearful that the newcomers might steal their jobs, the residents of Miami gave the new arrivals a cold welcome. So the Haitian immigrants built a community for themselves in the hills above the city, one that became steeped in the warmth and vibrancy of Haitian Creole culture.

Now, the community known as Little Haiti is under threat as South Florida real estate developers, hedging against a future of rising seas, come seeking higher and drier properties for their wealthy beachfront clients.

This quest to “climate gentrify” Little Haiti—which ranges between 13 and 32 feet above sea level, making it one of the highest neighbourhoods in Miami—has quickened in the wake of Donald Trump’s creation of a federal tax break for so-called “Opportunity Zones,” writes Grist. These zones are defined as neighbourhoods or municipalities that have “either a 20% or greater poverty rate, or a median income no greater than 80% of [an adjacent] metro area.”

Under this new tax scheme, “developers can defer paying capital gains taxes until 2026; the tax break can become permanent if they keep the property for 10 years or reinvest profits in Opportunity Zones Funds,” reports Grist. Many critics view the measure as a boondoggle, created entirely for the benefit of rich developers with no intent to help the poorer residents who built the communities in these areas.

“There are no strings on the tax break, such as building a certain amount of affordable housing, hiring from within the neighbourhood, or consulting local residents,” and “the minimum investment requirement is too high for residents,” said Adrian Madriz, executive director of Struggle for Miami’s Affordable and Sustainable Housing (SMASH.

In Little Haiti, the rising costs are driving out thousands of long-time residents who cannot afford rents that have doubled, and sometimes tripled, in a single year. In the course of this exodus, a community’s vibrant culture is being lost.

The situation is a repeat of what happened to the working-class Puerto Rican barrio of Little San Juan, Grist notes. Located “just south of Little Haiti,” the barrio has been “thoroughly gentrified” over a decade that saw property prices increase as much as twentyfold. “Little San Juan” no longer, “the neighbourhood is now known as the Wynwood Arts District.”

In Little Haiti, Grist says the median price per square foot, which rose 5.3% in 2019, will go up another 4% in 2020, according to the real estate database Zillow.

And with seas predicted to rise “up to 10 inches by 2030, two feet by 2060, and five feet by 2100,” Little Haiti, with its high perch, “becomes even more attractive, particularly to large-scale developers that plan years or even decades ahead.”

But the community “isn’t going down without a fight,” says Grist, even if the battle is uphill, and against deep pockets. “Residents have organized and are actively trying to seize the reins before their community is lost.”

Marleine Bastien, executive director of Family Action Network Movement and a resident of Little Haiti, says her neighbourhood is determined not to surrender. “This is a fight for our very existence that’s going on right now,” she told Grist.