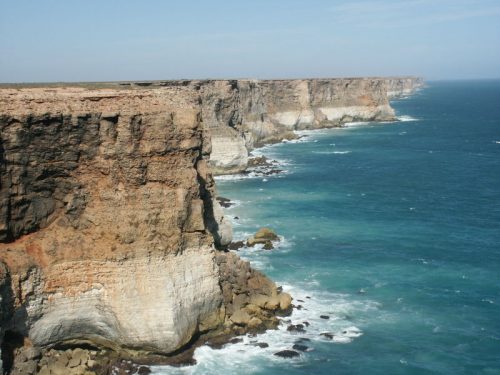 Norwegian colossal fossil Equinor announced late last month that it is abandoning a US$200-million plan to drill for oil in the deep waters of the Great Australian Bight Marine Park, the third retreat for a parade of oil and gas explorers that also includes BP and Chevron.

“The decision is a significant win for environment groups and other opponents of the project, including Indigenous elders and local councils,” The Guardian reports. “The proposal sparked protests supported by tens of thousands of people opposed to fossil fuel extraction in a marine wilderness area.”

Equinor had just recently received the Australian government’s blessing to drill at its proposed Stromlo-1 well site, in water more than 2.2 kilometres deep and nearly 400 kilometres off the coast of South Australia. But instead, “we are setting new short, mid- and long-term ambitions to reduce our own greenhouse gas emissions and to shape our portfolio in line with the Paris Agreement,” said CEO Eldar Sætre.

“Following a holistic review of its exploration portfolio, Equinor has concluded that the project’s potential is not commercially competitive compared with other exploration opportunities in the company,” added Jone Stangeland, the company’s Australia country manager.

The Wilderness Society had filed suit against the approval at Stromlo-1, and its South Australia director, Peter Owen, said he welcomed the company’s decision to “responsibly withdraw” from the project.

“It’s been a while coming, but the right decision is the right decision, and we have no doubt that the hundreds of thousands of people that have supported the campaign to fight for the Bight will be both delighted and relieved to hear this news,” Owen said. He urged the climate-denying national government of Scott Morrison to “listen to the people and permanently protect the unique waters of the Great Australian Bight from drilling for good.”

But Resources Minister Keith Pitt said the government is still committed to “encouraging the safe development” of Australia’s offshore oilfields. “The Bight basin remains one of Australia’s frontier basins and any proposals for new oil and gas fields in this area will be assessed fairly and independently,” he added.

Pitt and the Australian Petroleum Production and Exploration Association both called Equinor’s withdrawal a disappointment for South Australia, with APPEA CEO Matthew Doman claiming the project “had been subject to an extreme campaign of false and exaggerated claims that deliberately overstated the risks and ignored the potential benefits.” Greenpeace Australia Pacific CEO David Ritter called the decision an “incredible win for people power and nature,” adding that coastal communities, Indigenous traditional owners, surfers, the seafood industry, tourism operators, and local businesses had devoted years of relentless campaigning to the issue.

“Opening a new fossil fuel basin in the middle of our ocean was always madness,” said South Australian senator and Green Party environment spokesperson Sarah Hanson Young. “Moving to net-zero emissions by 2050 means we must reduce pollution now, not give the green light to new polluting projects.”