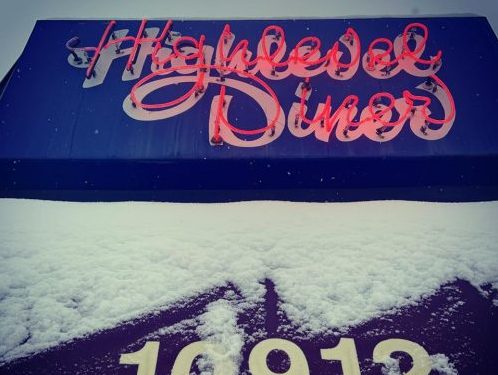 An Edmonton diner has begun estimating the carbon footprint of the various meals on its menu, using calculations produced by the non-profit Northern Climate Stewardship & Sustainability Society.

“We’ve noticed an increasing number of people who are concerned about their own carbon emissions and carbon footprint,” Highlevel Diner co-owner Debbie Parker told CBC’s As It Happens show last month. “The whole idea is to get people talking.”

The diner had already introduced a 10% discount for patrons who arrived by bike, CBC says. So when the NCSSS approached Parker to pitch a pilot project, “it seemed like a perfect fit”.

The footprints for each dish are calculated based on “how much carbon is generated during farming, production, transportation,” the national broadcaster explains. “Each meal is colour coded with either a green circle for low level, yellow for medium, and orange for the highest. For example vegetarian dishes, like the Thai Coconut Green Curry, are given a green rating.” Meals with red meat are marked orange.

The new menu has generated a mostly—but not universally—positive response.

“It just gives people the option similar to, you know, nutrition facts on a label,” Parker said. “If you’re concerned about your sodium intake or sugar intake, that would be something that you’re going to pay close attention to.”

As for the negatives she’s been hearing, “I think they feel that we’re against maybe the meat industries, the dairy, and all of that kind of thing.’ But she says the diner has worked with local beef and dairy producers for nearly 40 years, and the goal now is to open a conversation—if a customer wants to order a steak, she’s fine with that.

She said it’s too soon to say whether the new menu has produced a measurable change in customers’ eating habits.

Scandinavia Looks to Solar in ‘Land of the Midnight Sun’