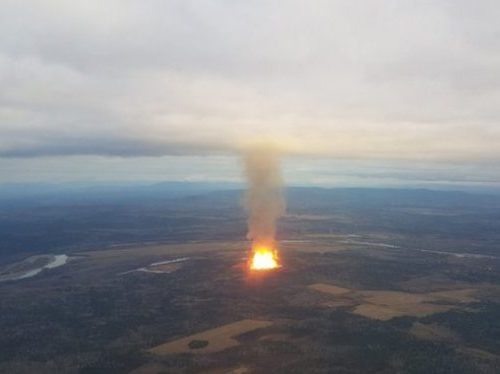 The Lheidli T’enneh First Nation has responded to a Transportation Safety Board of Canada (TSB) report on an October 2018 Enbridge pipeline explosion near the community’s borders, saying the report contains “shocking” confirmation of serious safety breaches.

The newly-released findings show that the explosion—which rattled band office windows two kilometres away and forced some 100 people in the community to evacuate—was the result of “stress corrosion cracking,” reports Prince George Matters. In the wake of the report, the Lheidli T’enneh, who filed a lawsuit against Enbridge in February 2019, have reiterated their profound lack of confidence in the pipeliner’s capacity to transport hydrocarbons safely.

“My community understandably remains very concerned about Enbridge’s operations through our territory, and for good reason,” said Lheidli T’enneh Chief Dayi Clay Pountney in a news release. Community representatives had been asking for answers from Enbridge about the explosion since it occurred, but had not received an adequate response.

Now, the TSB report has revealed a series of missteps, beginning with Enbridge’s approval of a 2016 request for an inspection deferral that had been scheduled for 2017. TSB investigators were “unable to determine why the standard operating practices were not followed.”

The report also observed that the National Energy Board’s (NEB) March 2013 audit of Westcoast, the Enbridge subsidiary responsible for the pipeline, found the company’s integrity management plan did not “meet the NEB’s expectations for a complete, robust, and fully implemented program.” Also far from adequate were Westcoast’s efforts to consult with the Lheidli T’enneh and others on emergency response protocols. The TSB determined that the Lheidli T’enneh, along with other communities and organizations that were potentially at risk, were not included “in any of Westcoast’s emergency response exercises between 2014 and 2018”.

Such a failure to involve community stakeholders left Lheidli T’enneh residents self-evacuating down the only road out of their community, a road that at one point crosses the pipeline right-of-way, the TSB report says.

“It is my expectation that decision-makers and investors in Calgary and elsewhere would agree with my community’s assessment that this is unacceptable,” said Pountney. “This does not amount to the safe, world-class transportation of hydrocarbons through our territory.”

Reporting on Lheidli T’enneh’s lawsuit against Enbridge a month after it was launched in February 2019, the Aboriginal Peoples’ Television Network (APTN) explained that the community had “requested a permanent injunction that would prevent the company from operating the pipeline in their territory and reserves,” and for “the pipeline’s immediate dismantling and removal.” In response, Enbridge posted a statement on its website declaring that it would not be “in the public interest to stop operating a critical piece of energy infrastructure that millions of people in B.C. and the U.S. Pacific Northwest rely on every day.”

That Enbridge went on to restore the broken pipeline to 80% of its operational capacity within a month of the explosion—while still ignorant of the explosion’s precise cause—“appalled” then-Lheidli T’enneh chief Dominic Frederick.

“All anyone could talk about was getting the gas back on,” he told APTN. “They turned it back on without answers and without our consent. They didn’t care about us.”

Following the explosion, the community was “totally shut out,” said Lheidli T’enneh lawyer Malcolm Macpherson. “They received the odd surface-layer email, but they haven’t been participants in the investigation and that is wrong,” he told APTN. “This pipeline literally blew up in their backyard. Yet they are not involved in the investigation, the gas was turned back on without their consultation, without their participation, and, very importantly, without their consent.”

Macpherson confirmed the lawsuit would be “seeking compensation for damages, nuisance, and trespass, and a declaration that the Lheidli T’enneh First Nation was never consulted on the construction, operation, repair, or return to service of the pipeline.”

In an interview with CBC, Enbridge Senior Vice-President Michele Harradence described the risk of stress corrosion cracks as “a known threat to pipeline integrity,” but said the cracking “grew faster than we anticipated.”

In an official response to the TSB findings, Enbridge apologized that the 2018 explosion “has caused concerns and disrupted the lives of many people in the area,” reports Kamloops Matters. In its release, the company stated it has “learned from this incident,” and has taken steps to ensure the safety of its natural gas system.

Tropical forests may be heating Earth by 2035