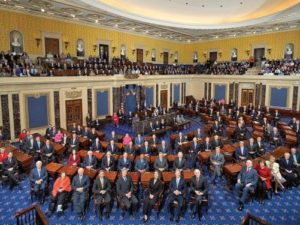 A massive, bipartisan energy bill could come up for a vote in the U.S. Senate as soon as this week, with billions of dollars directed to solar, wind, and storage, but no explicit climate targets, major gaps on energy efficiency, no tax credits for electric vehicles or renewables, and continuing support for fossil fuels.

The bill “has a better chance than most energy bills of getting through Congress,” and is seen by supporters as presenting “critical federal aid to a power sector faced with the Herculean task of mid-century decarbonization,” Utility Dive adds. “But opposition from groups opposed to its inclusion of  fossil fuels and exclusion of tax credits for renewables and electric vehicles may present challenges.”

Murkowski, chair of the Senate Energy and Natural Resources Committee, called the measure “our best chance to modernize our nation’s energy policies in more than 12 years”. Manchin, the ranking Democrat on the panel, said the bill would “make a downpayment on emissions-reducing technologies, reassert the United States’ leadership role in global markets, enhance our grid security and protect consumers.”

All told, the Act “contains hundreds of millions of dollars in funding over the coming years to boost research and development for solar and wind power, energy storage, smart grid, electric vehicles, and other key clean energy technologies,” Greentech writes. “But its lack of targets or mandates for reducing carbon emissions, and some of its provisions on fossil fuels and mining, are expected to draw opposition from Democrats seeking a national policy to combat climate change. Democrats in the House have submitted a bill, dubbed the CLEAN Act, that calls for a 100% clean economy by 2050 and a comprehensive climate policy.”

But energy efficiency groups are “decrying the bill’s absence of a provision to allow homeowners to qualify for larger mortgages for more energy-efficient homes,” Greentech notes. “This policy, part of a 2019 bill from Sens. Rob Portman (R-OH), and Jeanne Shaheen (D-NH), was stripped from the Senate bill due to pressure from homebuilder industry groups, according to the Alliance to Save Energy.”

While mainstream climate organizations are prepared to work with the bill, Utility Dive cites efficiency and environmental organizations among its biggest opponents.

“There’s a strong foundation to work with in terms of getting something to the House floor” and then on to Donald Trump for signature, said Brad Townsend, managing director for strategic initiatives at the Center for Climate and Energy Solutions.

“This bill includes a number of small-bore proposals, some productive and some detrimental,” countered Sierra Club Legislative Director Melinda Pierce. “It also incorporates some egregious non-starters, such as a provision to vastly expand the permitting of destructive mining operations, as well as an expansion of fracked gas exports.”