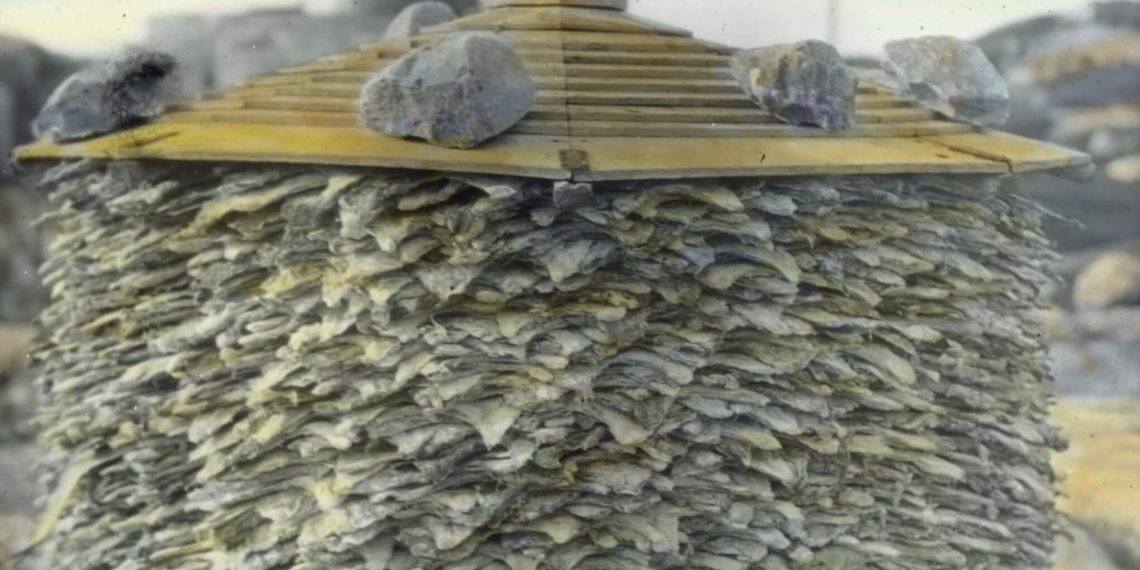 An outdoor store of dried and salted cod in Norway. Image: By Anders Beer Wilse

A food source for many species spawns under the Arctic ice. Now fish breeding problems, caused by ice melt, threaten its future.

A recent study by researchers at the Institute of Marine Research (IMR) in Norway has found that declines in winter sea ice cover in the Barents Sea region of the Arctic, plus warmer sea temperatures, are causing declines in polar cod reproduction rates.

This has grave implications − not just for future stocks of polar cod, but for the survival of many other Arctic species as well. The polar cod is a vital part of the Arctic food chain. After spawning under the ice in the early months of the year, the fish – feeding on a diet of zooplankton − grows quickly. It then becomes a food for other larger fish and for sea birds, seals and whales.

“Unfortunately, climate projections suggest that the Barents Sea will become warmer and virtually ice-free as early as in 2030”, says Mats Huserbråten, one of the study’s authors. “The outlook for this cornerstone of the Arctic food chain is therefore bad.”

If trends in ice reduction and the heating of Arctic waters continue, the reproductive cycle of the polar cod could collapse, say the researchers.

The fish is endemic to the polar regions (found nowhere else) and has developed in ways which make it dependent on the presence of ice. Its eggs are spawned under the ice, where they grow, even in sub-freezing temperatures. The larvae then feed on the zooplankton − plentiful in mid-year, when the annual ice melt occurs.

Winter ice cover in the Arctic has been in decline since the 1970s, with a sizeable part of the reduction happening in the Barents Sea.

The polar cod stock there has been monitored annually by a joint Norwegian-Russian survey since 1986. In the IMR study, researchers found that not only were stocks diminishing, but that what are described as spawning assemblages of the polar cod were moving further north.

“Climate projections suggest that the Barents Sea will become warmer and virtually ice-free as early as in 2030. The outlook for this cornerstone of the Arctic food chain is therefore bad”

As climate change warms the planet’s oceans, many fish species have been observed moving away from the equator in search of cooler waters. While such fish movements have resulted in bigger catches in some areas, fish stocks in many more southern regions are in sharp decline.

The reduction in winter ice cover in the Arctic caused by climate change is affecting a wide variety of species – from polar bears to the smallest marine life. It has also made the polar region more accessible – to cruise operators, shipping companies and to the fossil fuel industry.

The Norwegian study says growing human activity in the Arctic is putting further pressure on the polar cod and other vulnerable species.

“Together, these factors mean we need a better understanding of the possible impacts on Arctic ecosystems, to provide a basis for sustainable management of the high north”, say the researchers. “We have excellent tools at our disposal in the shape of models that can help us to understand trends and long-time series of survey data.” − Climate News Network