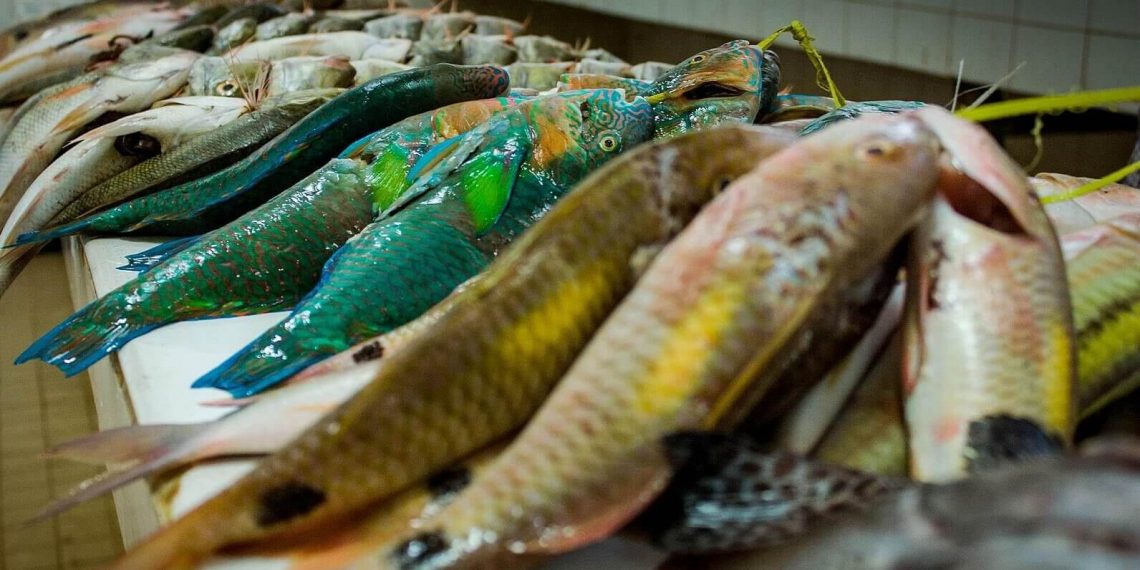 Parrot fish on sale in a Fijian market. Image: By Mj Blanchet

As climate heating drives tropical fish to seek survival elsewhere, humans will be left without the protein they need.

LONDON, 2 March, 2020 − Stocks of tropical fish that have provided vital protein for local people for generations may soon disappear as the oceans warm, leaving empty seas in their wake, scientists believe. But there could be help in international protection schemes.

Already researchers have found that fish are voting with their fins by diving deeper or migrating away from equatorial seas to find cooler waters. But now they have calculated, in a study published in the journal Nature, that tropical countries stand to lose most if not all of their fish stocks, with few if any species moving in to replace them.

Although scientists have known that the composition of stocks is changing in many world fisheries, they have not until now fully appreciated the devastating effect the climate crisis will have on tropical countries.

In the North Sea, for example, when fish like cod move north to find cooler and more congenial conditions for breeding, they are replaced by fish from further south which also have a commercial value, such as Mediterranean species like red mullet. But when fish move from the tropics there are no species from nearer the equator that are acclimatised to the hotter water and able to take their place.

Now Jorge García Molinos of Hokkaido University and colleagues in Japan and the US have undertaaken a comprehensive study of 779 commercial fish species to see how they would expand or contract their range under both moderate and more severe global warming between 2015 and 2100, using 2012 as a baseline for their distribution.

“The exit of many fishery stocks from these climate change-vulnerable nations is inevitable, but carefully designed international cooperation could significantly ease the impact on those nations”

The computer model they used showed that under moderate ocean warming tropical countries would lose 15% of their fish species by the end of this century. But if higher greenhouse gas emissions continued, fuelling more severe heat, that would rise to 40%.

The worst-affected countries would be along the north-west African seaboard, while south-east Asia, the Caribbean and Central America would also experience steep declines.

Alarmed by their findings, because of the effect they would have on the nutrition of the people who relied on fish protein for their survival, the scientists examined existing fisheries agreements to see if they took into account the fact that stocks might move because of climate change.

Analysis of 127 publicly-available international agreements showed that none contained language to deal with climate change or stock movements to other waters.

Some dealt with short-term stock fluctuations but not permanent movements, and did not deal with the possible over-fishing of replacement stocks.

The scientists suggest an urgent look at the issue at the annual UN climate talks because of the loss of fish stocks and the financial damage that warming seas will do to the economies of some of the world’s poorest countries.

They go further, suggesting that poor countries could apply for compensation for damage to their fisheries during negotiations under the Warsaw International Mechanism for Loss and Damage associated with Climate Change Impacts (WIM), and also raise the possibility of help from the Green Climate Fund, set up to help the poorest countries adapt to and mitigate the effects of climate change.

Professor García Molinos, based at Hokkaido’s Arctic Research Center,  said: “The exit of many fishery stocks from these climate-change vulnerable nations is inevitable, but carefully designed international cooperation together with the strictest enforcement of ambitious reductions of greenhouse gas emissions, especially by the highest-emitter countries, could significantly ease the impact on those nations.”

While the research relies on computer models to see how fish will react to warming seas in the future, the scientific evidence available shows that they are already responding. It also shows that keeping the world temperature increase down to 1.5°C, the preferred maximum agreed at the 2015 Paris climate talks, would help fisheries globally.

And the Hokkaido research demonstrates yet again how it is the poorest nations, which have contributed least to the carbon dioxide and other greenhouse gas emissions causing climate change, that will suffer most from their effects. − Climate News Network