Condemnation Rains Down After Online Images Depict Attack on Thunberg, Violence Against Blockaders 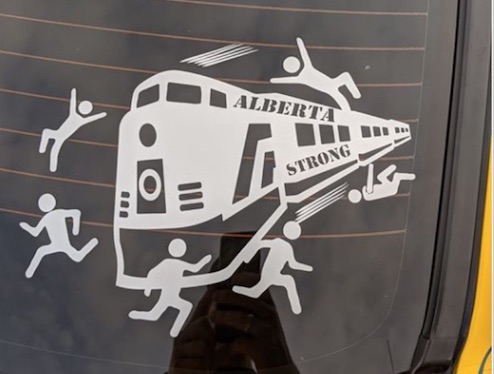 Trigger alert: This story contains descriptions of graphic images that may be disturbing to some readers.

Two separate online images from Alberta are earning widespread condemnation, prompting even the Kenney government to insist the province can and must do better.

One of the images portrayed a sexually graphic attack on #FridaysforFuture founder Greta Thunberg. The other showed a train driving through a crowd of blockaders.

The first of the two images, posted along with the logo of Red Deer oilfield services company X-Site Energy Services, “shows a drawing of the back of a nude female and two hands pulling from behind on her braided hair,” Huffington Post Canada reports. “The word ‘Greta’ is written across her lower back.” The image came to light after Rocky Mountain House town councillor Michelle Narang called it out in a Facebook post.

But by then, the image had circulated widely, on decals meant to be worn on workers’ hard hats. “The sticker, reading ‘X-Site Energy Services’, was handed out recently as promotional material at job sites,” HuffPost states, citing the worker who originally sent it to Narang. “Although the actual stickers weren’t distributed at their workplace, they said the graphic image was circulating among their colleagues on Wednesday” last week.

Narang, an avid oil and gas industry supporter, told HuffPost she cried when she first saw the sticker.

“This is an industry Alberta is fighting for so desperately. This sticker is not something Alberta or Albertans need,” she said. “It’s sad to me (the sticker) went through a supply chain of people, who thought about it, printed it, and distributed it. It blows my mind anyone would think it’s funny.”

“This company represents everything that the oil and gas industry needs to fight against,” she added, in an interview with Global News. “I am absolutely sickened that X-Site Energy Services would think that the hard-working men and women in the energy industry would condone this representation of a child clearly being raped.”

Alberta Culture, Multiculturalism and Status of Women Minister Leela Aheer declared the image “completely deplorable, unacceptable, and degrading” in a Thursday morning tweet. “This is not what our province stands for,” she wrote. “Whoever is responsible should be ashamed and apologize immediately. I stand with Albertans against this horrendous image.”

“Thank you for denouncing this odious image and the message it sends,” Premier Jason Kenney responded.

Narang told Global she contacted X-Site General Manager Doug Sparrow to find out whether he knew about the  stickers. “When I asked him if he was aware that there are stickers circulating with his logo depicting the rape of Greta Thunberg, he said yes, that he was aware,” Narang said. “And I said, ‘So you are fine with an image that your company condones the rape of children?’ And he said, ‘She is not a child, she is 17.’”

Under the Criminal Code, HuffPost helpfully points out, “child pornography is any visual representation of a person under the age of 18 engaged or depicted to be engaged in a sexual activity.” In an update Saturday, the online news outlet says the RCMP determined the image “does not meet the criteria for it to constitute a criminal offence”.

Global reports that, when a reporter repeatedly asked Sparrow if X-Site had printed the stickers, he repeatedly responded the company hadn’t posted the image online. He added that he’d fielded multiple phone calls “personally and business-wise, to mitigate the damage that has been done.”

Narang told Global she could not and would not be silent about anyone advocating rape and misogyny, adding that the sticker was the worst depiction she’d ever seen—and upsetting to her teenage daughter. “If she can see through that and see the message, I’m pretty sure a grown adult man who is a leader in the industry—a business owner in industry—should be able to see and understand the message that he’s putting out there,” she said.

“We do not rape women and girls to teach them a lesson. This is not our oilpatch,” she added. “We can’t have this representation of the oilpatch and the oil companies and of our industry be accepted as normal. People need to start speaking out about it. It’s not OK.”

Thunberg herself was characteristically terse in response to the attack. “They are starting to get more and more desperate,” she tweeted. “This shows we are winning.”

On the same day the X-Site decal made the news, Edmonton body shop worker Matt Bussey said he was just trying to have fun when he crafted a second decal “which depicts a train with the words ‘Alberta Strong’ and stick figures scurrying around it to avoid being struck,” reports the Toronto Star’s Edmonton bureau. “One of the figures is falling under the train while another appears to have been tossed in the air after being struck.”

“Honestly I found it funny and that’s about it,” Bussey said. “It’s just purely entertainment.” He added that he took down the post after a Facebook user reported is as a death threat, but maintained he wasn’t encouraging violence.

While the decals were on sale for $5 each, Bussey said he wasn’t making any money on sales.

Bert Crowfoot, founder and CEO of the Aboriginal Multimedia Society of Alberta, told the Star he had problems with the decals. “I was really disappointed,” he said. “I see them blowing through and killing and injuring people that don’t agree with his point of view.” After sharing it on his own Facebook page to encourage discussion, he saw it get hundreds of shares and numerous comments, and generate heated enough discussion that he decided to delete it.

“What he may have thought started off as a joke, it didn’t end up as a joke. I had to delete it because of all the negative comments going back and forth,” Crowfoot said. “If you really want to find out what the average person’s views on Indigenous people are, wait until something like a blockade and…read the comments.”