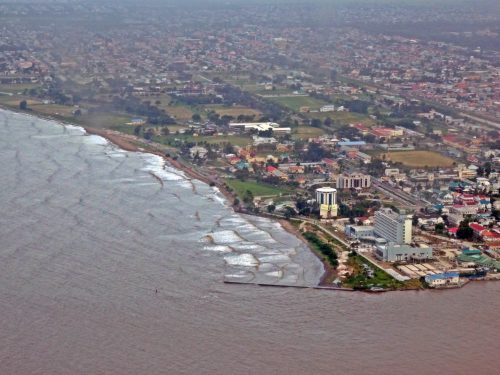 The World Bank is undercutting its own carbon reduction commitments and putting entire Caribbean ecosystems at risk by directing US$55 million to support fossil fuel extraction off the coast of Guyana, campaigners at Sassenberg, Germany-based Urgewald charged yesterday, after a Guyanese high court cleared the way for colossal fossils ExxonMobil, Hess, and CNOOC to continue drilling.

“The World Bank’s public assistance to upstream oil development in Guyana is a blatant contradiction to Guyana’s climate change priorities and the bank’s commitment to the Paris climate agreement,” said Urgewald Senior Advisor Heike Mainhardt. “I am perplexed by the World Bank’s disregard for its own warning.”

She said the bank got around its own earlier promise to ban loans to upstream oil and gas projects after 2019 by advancing the money to the Guyanese government, which was then free to fund the fossils directly.

“The oil field off the coast of Guyana is one of the largest crude discoveries of recent years,” the organization adds in a release, with potential for 13.6 billion barrels of oil, 32 trillion cubic feet of natural gas, and combined emissions of 2.56 billion tons of carbon dioxide if all those resources were extracted and burned.

“On top of the detrimental effect on the global climate, a potential oil accident would cause severe damages to the entire Caribbean and its precious ecosystems,” the release adds. “A major spill would also seriously damage the Caribbean eco-tourism sector, which is worth US$16 billion annually and creates 650,000 jobs.”

The Guardian says the crude discoveries off Guyana could make the country one of the world’s biggest oil producers, prompting “massive change for a country of only 800,000 people and less than $5,000 in GDP per person in 2018” and driving up annual government income from $270 million in 2020 to $10 billion in 2030. But international lawyer Melinda Janki asked why the bank wasn’t funding affordable renewable energy instead, adding that the fossil support was “pushing Guyana down a financially disastrous development path”.

A World Bank spokesperson said the Washington-based institution “has not provided any financing to develop the Stabroek Block oilfield,” adding that funding directed to a natural resources governance project “is aligned with the World Bank’s 2017 One Planet summit announcement that the [World Bank Group] will no longer finance upstream oil and gas, but will continue to help client countries strengthen transparency, governance, institutional capacity, and the energy regulatory environment, including oil and gas.”

Urgewald counters that “up until oil was discovered, the World Bank provided very limited public assistance to Guyana—only about $70 million over the last decade. This greatly changed in December 2017 when the government of Guyana announced that its Oil and Gas Development Program would be jointly funded by the World Bank and the Inter-American Development Bank (IDB). For the World Bank’s part, $35 million in general budget support was provided in June 2018, followed by $20 million in March 2019 for the Petroleum Resource Governance and Management Project.”

As for the bank’s focus on governance, “there are no best practices when it comes to new upstream oil development if we are to remain under 2.0°C warming,” Mainhardt said. “This is why the World Bank pledged not to finance any upstream oil or gas after 2019.”

“Guyana’s development aim has been to have 100% renewable energy by 2025,” added Urgewald finance campaigner Ute Koczy. “It’s outrageous that the World Bank is now pushing Guyana to become one of the biggest greenhouse gas emitters of all time,” and “this devastating public assistance to oil has to be stopped before it irretrievably damages Guyana, the Caribbean, and the global climate system.”