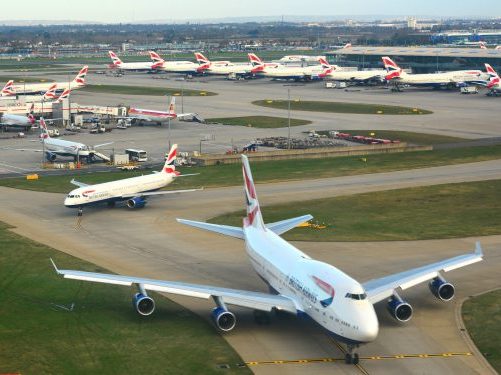 United Kingdom climate campaigners are declaring a precedent-setting win after an appeal court ruled the proposed third runway at Heathrow Airport illegal, citing the national government’s failure to include the country’s climate commitments in the project planning process.

The £14-billion project would have been complete by 2028, bringing an additional 700 more planes per day through one of the world’s busiest airports, with a corresponding dramatic increase in carbon pollution.

But not after the government approved the runway without factoring in its own climate policies. “The Paris Agreement ought to have been taken into account by the secretary of state,” said Lord Justice Lindblom of the Court of Appeal. “The national planning statement was not produced as the law requires.”

The decision “is a major blow to the project at a time when public concern about the climate emergency is rising fast and the government has set a target in law of net zero emissions by 2050,” The Guardian reports. “The prime minister, Boris Johnson, could use the ruling to abandon the project, or the government could draw up a new policy document to approve the runway.”

The UK government said it had no plans to appeal the ruling. Heathrow and its supporters said they would. Climate hawks hailed the world’s first major court ruling based on the 2015 Paris deal, adding that its impact could spread across the country and around the world.

“It’s now clear that our governments can’t keep claiming commitment to the Paris agreement, while simultaneously taking actions that blatantly contradict it,” said barrister Tim Crosland, director of legal charity Plan B, which brought the challenge against the runway. “The bell is tolling on the carbon economy loud and clear.”

The Guardian says Plan B launched several legal actions after MPs adopted the national policy statement for the new runway in 2018. Other challenges came from local residents, councils, London Mayor Sadiq Khan, Friends of the Earth, and Greenpeace. The high court rejected them all last May. But “Plan B argued that the Paris agreement target, which the government had ratified, was an essential part of government climate policy, and that ministers had failed to assess how a third runway could be consistent with the Paris target of keeping global temperature rise as close to 1.5°C as possible.”

The appeal judges accepted that argument, while upholding the lower court on concerns about air and noise pollution, traffic, and the multi-billion-pound cost of the project.

Conservative MP Lord Randall, a climate advisor to former prime minister Theresa May, called the decision “an opportunity for Boris Johnson to put Heathrow expansion to bed and focus on the most important diplomatic event of his premiership, the UN climate summit in Glasgow in November.” That meeting, COP 26, “is his chance to shine on the world stage,” Randall added.

Leiden University international public law specialist Margaretha Wewerinke-Singh told The Guardian the ruling would have far-reaching implications. “For the first time, a court has confirmed that the Paris Agreement temperature goal has binding effect,” she said. “This goal was based on overwhelming evidence about the catastrophic risk of exceeding 1.5°C of warming. Yet some have argued that the goal is aspirational only, leaving governments free to ignore it in practice.”

But “government needs to put climate targets at the heart all big decisions or risk missing their own net-zero objectives with devastating consequences, for climate and stability,” said University of East Anglia  climate scientist Corinne Le Quéré. “I am relieved this is finally recognized in law.”

“Imagine when we all start taking the Paris Agreement into account,” added #FridaysforFuture founder Greta Thunberg.

UK Transport Secretary Grant Shapps said the Johnson government is weighing its next steps, but an appeal is not one of the options. “Our manifesto makes clear any Heathrow expansion will be industry-led,” he said. “Airport expansion is core to boosting global connectivity and levelling up across the UK. We also take seriously our commitment to the environment.”

But a Heathrow spokesperson said the airport “will appeal to the supreme court on this one issue, and are confident that we will be successful. Expanding Heathrow, Britain’s biggest port and only hub, is essential to achieving the prime minister’s vision of global Britain. We will get it done the right way.”

Federation of Small Businesses National Chair Mike Cherry called the ruling a “blow to small firms who need greater regional and global connectivity, as well as more opportunities to export.” But The Guardian notes most of the traffic through Heathrow consists of pleasure flights, and more than two-thirds of it traces back to 20% of the UK population.

“No amount of spin from Heathrow’s PR machine can obscure the carbon logic of a new runway,” said Greenpeace UK Executive Director John Sauven. “Their plans would pollute as much as a small country.”

“This is the final nail in the coffin for Heathrow expansion,” said local campaigner Geraldine Nicholson of Stop Heathrow Expansion. “We now need to make sure the threat of a third runway does not come back.”

Schools for girls can help to answer climate crisis