Petrosaurus Rex vs. Reality: Teck Mine Defeated by Low Price of Oil 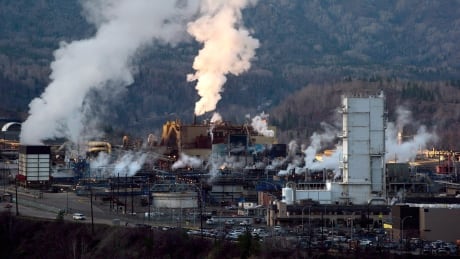 Paleontology tells us the most fearsome Jurassic-era predators had no outer ears, and depended on a narrow range of sub-sonic vibrations to detect other earless, large, lumbering dinosaurs they could rip to shreds and render into raw-meat power lunches.

They are now, of course, ancient history. In their place, evolution delivered far smaller, more agile mammals with revolutionary ears and bigger brains able to receive and process a wider range of warning signals, and detect diverse prey on which to better dine and survive.

Enter Alberta Premier Jason Kenney, who might aptly be classified as Petrosaurus Rex.

On Monday he proclaimed he was shocked—shocked and appalled!—when Teck Resources Ltd. formally jettisoned its bid to build a C$20.6-billion carbon bomb in northern Alberta. Apparently, he heard no rumblings that Teck itself might ditch that deal before the Trudeau Cabinet considered whether to approve a crucial federal permit this week.

Yet there were countless alarm signals, particularly from within the very fossil fuel sector Kenney covets and cossets. Most fatally, they are financial ones which have already underpinned an exodus of major global players—and $30 billion in investment capital—from western Canada energy megaprojects since 2015.

Teck’s Frontier mine was the latest domino to fall. But there are some 20 more pending tar sands/oil sands projects Alberta has already approved to build. They are not yet financed, and may never be.

The problem is not that Jason Kenney has failed to see an audiologist, or buy a hearing aid. [If that’s really his problem, I can recommend a provider for that, just two time zones away.—Ed.] It is that he is willfully tone deaf to the tsunami of global evidence warning that most fossil-centric companies, petro-states, provinces, and projects are facing dire days for the foreseeable future.

Defeated by the Price of Oil

One telling proof of his hear-no-evil cochleae: While Kenney wildly cast blame for the Teck retreat on what he sees as feckless federal Liberals, lawless environmentalists, Indigenous anarchists, and foreign agitators disguised as charities, the premier did not once mention the price of oil as a decisive driver.

Yet Teck’s latest quarterly report, and the recent billion-dollar write-down on Alberta’s new Fort Hills tar sands/oil sands project by co-developers Teck and Suncor, confirm that the downward trend in world oil, coal, natural gas, and LNG prices over the past five years has hammered all but a few players and projects.

Two charts distill this reality. One shows the rise in value of overall U.S. stocks during the past five years versus the relentless slide in oil and gas investments. The other shows their relative weighting, which in turn illuminates the level at which hedge funds, pension plans, and shareholders are fleeing most fossil stocks.

Teck is no exception to this trend. Nor is Alberta. In fact, because of their deep dependence on fossil fuel prices set outside Canada, they both fit that precarious profile perfectly. As world fossil prices approach historic lows, those who bet big on the opposite trend are getting whacked.

The company share price plunged to $10.92, down from $26 one year ago. Year over year profit dropped 76%. The main driver was a steep drop in world market prices for steel-making (metallurgical) coal and copper, and scant prospects for price recovery on its core mining business.

But Teck also took a $910-million write-down in the value of its share in the recently-opened Fort Hills tar sands/oil sands project in Alberta, because of lower than forecast oil prices and bitumen revenues. It owns a minority interest. Only days earlier, the main partner and operator, Suncor, announced a $2.8-billion write-down on the same project for the same reason.

Teck CEO Don Lindsay also warned last week that the mining giant would write off another $1.1 billion if its undeveloped Frontier tar sands/oil sands project did not proceed. Now inevitable, this pending mega-loss drove down its share price even further, and sent more shareholders fleeing.

Recently, the price U.S. refiners will pay for Alberta bitumen has been in the US$35 range, which (according to past financial and regulatory filings) is less than half the price Teck needed to break even on operating and debt service costs for the Frontier mine.

This glaring gap between the price of bitumen-based oil and project costs was predicted by careful critics of the Frontier project. But it took Teck’s bombshell quarterly report to crack open fissures of doubt among business media commentators and analysts. One BNN Bloomberg host noted that Teck’s capitalization had dropped by more than $4 billion as shareholders fled the company, and that a huge, deep-pocketed partner needed to co-finance the $20.6 billion project was nowhere in sight.

But lost in the flurry of reports was the fact that Teck’s biggest losses stemmed from woefully wrong projections of rising revenues from its metallurgical coal division, and of constant sales to its prime customer, China. Forebodingly, Teck had an almost identical business plan for the Fort Hills and Frontier tar sands/oil sands projects—projections of ever-rising oil prices (above US$100 per barrel) and bitumen exports due to assumed relentless demand from China.

Teck is far from alone in making such mega-mistakes. Eight of the largest coal companies in the United States have declared bankruptcy in the past three years. They failed to foresee domestic coal generating plant closures, the advent of cheap natural gas and renewables, constraints on carbon emissions and capital loans, innovations in steel-making, falling metallurgical coal prices, and slowing coal imports by China and India. In Australia, coal companies replicated much of the same myopia, and the same heavy financial losses.

This is why nearly a dozen oil majors have fled Alberta since 2015, taken huge write-downs or losses, and invested in regions like the Permian basin in Texas/New Mexico, or deepwater prospects off the coasts of Norway, Africa, Brazil, and Persian Gulf countries. Making matters worse for the Alberta oilpatch, countries like Russia, Saudi Arabia, Iran, and Iraq are selling conventional oil at heavily discounted prices, just to earn cash flow for beleaguered state treasuries.

In short, there is a tidal wave of surplus oil building around the globe, all of it cleaner to extract and burn, cheaper to produce, and closer to big markets like China and India than any new Alberta tar sands/oil sands project. This is driving global prices down, even compelling OPEC states and allied countries to shut off production at existing sites to keep prices from falling further.

Low oil prices and booming global output have forced even Saudi Arabia to shutter high-quality, existing wells with production costs in the US$10 per barrel range. How deaf does Jason Kenney have to be to pretend a new tar sands/oil sands project that needs to take home US $100 per barrel can be financed, or secure committed Asian buyers for more than four decades?

For exactly the same reason, coal producers like Teck and other global giants are cutting capital budgets and closing some operations. So are many natural gas producers in North America, as they face a 20-year low in prices. Brand new LNG projects in the U.S. and Australia are being rocked by falling prices and faltering demand. In each case, significant price increases are far beyond the horizon.

Even in the vaunted Permian Basin, where oil majors have concentrated to frack prodigious volumes of oil and natural gas, formerly eager U.S. banks have begun spurning new loans for more exploration and drilling, and some major players have taken huge hits to their bottom line. So have many oil refiners in the U.S., Europe, and China.

So the fatal irony is that global fossil fuel production and demand are at an all-time high—but only a relatively few of the producers are actually profitable. Corporate giants like Exxon and Chevron are not among them, nor are petro-states like Russia and Iraq. Some are selling crude at bargain basement prices, just for cash flow.

These are the hallmarks of a global liquidation sale, which scientists warn has a direct correlation with increased, lasting damage to our biosphere. The biggest fossil players are burning more and more, but earning less and less. In many cases, they are losing money while burning everyone else’s future.

He has also condemned the federal ban on ocean oil tankers in northwest B.C., and wants recently-adopted federal impact assessment rules gutted. He opposes the federal carbon tax. A “hard cap” on Alberta emissions amounts to a profane epithet.

So there should be no doubt the Alberta premier wants the decades-long tar sands/oil sands binge to accelerate. And a graph of the resulting greenhouse gas emissions by province tells the story. 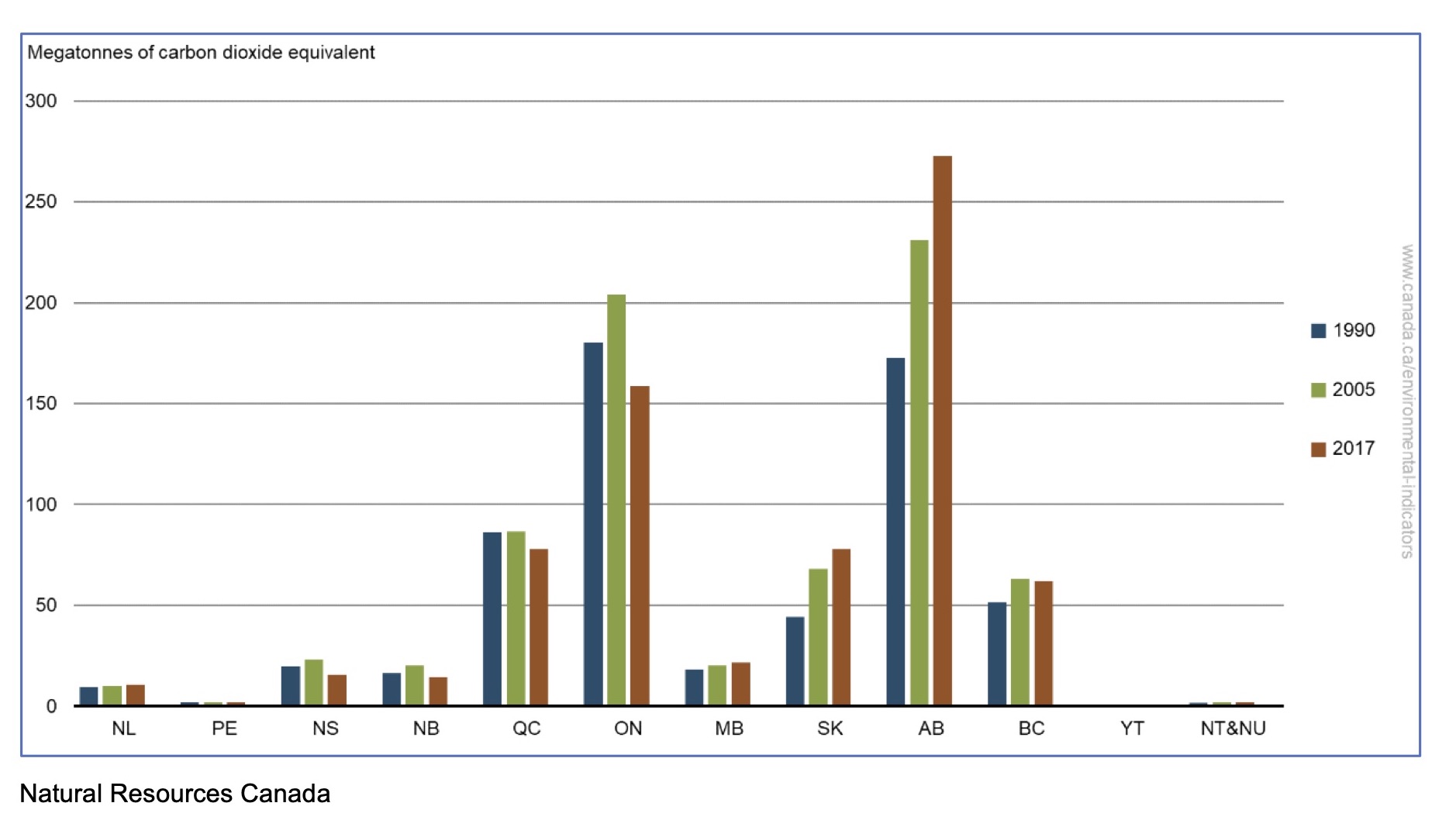 The Death Knell for Fossil Investment

Petrosaurus Rex would be the last to admit it, but the Teck quarterly report serves as a death knell for corporate capital investment in projects like the Frontier mine. Ottawa tried to stave off the obvious, and inevitable, with its reckless purchase of Trans Mountain/TMX. Throwing more billions after bad, or approving new tar sands/oil sands projects which have scant hope of being financed, would only carbon copy that folly.

As it is, Canadian taxpayers appear fated to be fleeced for $16 billion or more on that Trans Mountain/TMX bailout, and now own a pipeline that has virtually no chance of recouping costs or being sold. It was greased and greenwashed as a way to generate royalties for far-in-the-future green projects.

But Ottawa does not need to help build bad stuff now to pay for good stuff later, in the manner of someone who buys slum tenements but promises to donate to charities on their deathbed. For only $6 billion, Canada’s biggest pension plan is buying a huge portfolio of 28 already-built renewable energy projects in the U.S., with binding sales contracts and zero carbon footprint.

That is smart money at work.

Ever-larger green power projects are currently under construction in Texas and the U.S. southwest, some of which combine solar, wind, and cutting-edge battery storage technology on the same site. Alberta has been endowed with similar wind and solar potential, which many countries and provinces would envy.

Smart money will flow there, fast, if Edmonton and Ottawa put the bitumen binge in the past and jointly course-correct toward a low-carbon future. This will require Jason Kenney to quit grandstanding for provincial applause, grow a pair of………ears, and finally choose between truly saving his ship of state, or taking it down with him.

Rising tides will leave no choice for US millions