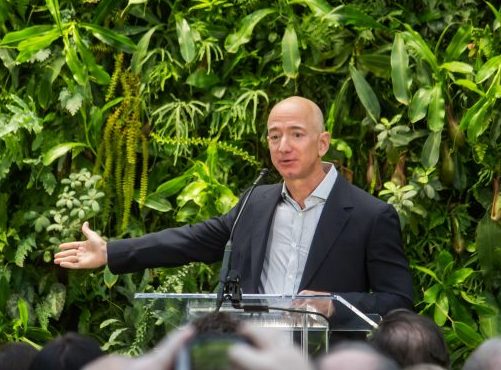 Amazon CEO Jeff Bezos has been receiving a megatonne of advice since forming his Bezos Earth Fund last week and pledging to donate US$10 billion of his own considerable wealth to help scientists and activists fight the climate crisis. Some of the most pointed comments have suggested he take a more look at his own company’s carbon footprint.

“Climate change is the biggest threat to our planet,” Bezos said on Instagram last Monday. “I want to work alongside others both to amplify known ways and to explore new ways of fighting the devastating impact of climate change on this planet we all share.”

He added that the grants will support “collective action from big companies, small companies, nation states, global organizations, and individuals.”

With an estimated net worth of $130 billion, Bezos is believed to be the wealthiest person on the planet, the Washington Post says.

The new fund “builds off prior commitments that Bezos has made in recent years to reduce Amazon’s impact on the environment, including signing a ‘climate pledge’ last year that commits the company to operate on 100% renewable electricity by 2030,” the Post writes. “Bezos signed the pledge one day before company employees—members of Amazon Employees for Climate Justice—planned to walk off the job in protest, saying the retailer and tech giant needs to do more to reduce its carbon footprint.”

The paper adds that Amazon “has a massive environmental [foot]print, delivering what some experts estimate is more than one billion packages a year to customers in the United States. The company’s Amazon Web Services is also the leading provider of cloud computing to corporate customers, consuming massive amounts of electricity to power its giant data centres.”

“The online retailer relies on fossil fuels to power planes, trucks, and vans in order to ship billions of items all around the world,” The Independent adds.

Amazon Employees for Climate Justice applauded the announcement, but warned that “one hand cannot give what the other is taking away.”

“The people of Earth need to know: When is Amazon going to stop helping oil and gas companies ravage Earth with still more oil and gas wells?” the group asked. “Why did Amazon threaten to fire employees who were sounding the alarm about Amazon’s role in the climate crisis and our oil and gas business? What this shows is that employees speaking out works—we need more of that right now.”

In her daily Heated newsletter, U.S. climate journalist Emily Atkin says Bezos’ billions will do some good, but she’s still taking his announcement with several grains of salt.

“Bezos holds disproportionate responsibility for climate change—he should be giving away money,” she writes. His company “has a carbon footprint that’s near-equivalent to the emissions of Switzerland or Denmark,” and “Bezos also holds unique responsibility for climate change by fostering a culture of unhinged consumerism—that is, a culture where everyone feels comfortable buying a lot of stuff and expecting that stuff to appear on our doorsteps almost immediately. According to one study published in the Journal of Industrial Ecology, up to 60% of global greenhouse gas emissions can be traced back to the products and services we consume.”