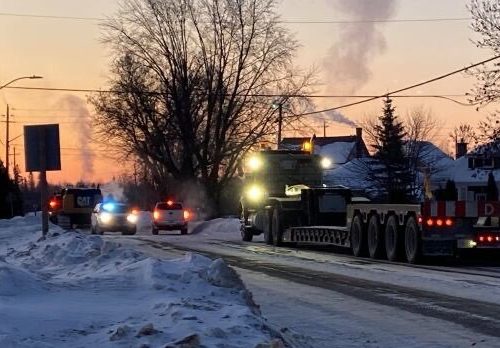 Yet another oil train has derailed along the CN Rail line, with 30 cars off the tracks and five of them leaking crude oil near the northwestern Ontario town of Emo, near Fort Frances.

The train went off the rails Tuesday evening, with no one injured, CBC News reports. Ontario Provincial Police said there was no danger to the public, but evacuated homes within an 800-metre radius. A nearby school was also closed.

“Contractors are onsite, CN is onsite. Everybody is coordinated and doing a wonderful job, and there’s no immediate danger or anything. Basically, everything is contained and we’re just dealing with it and moving forward,” Mayor Harold McQuaker told CBC.

Earlier in the week, Transport Minister Marc Garneau shifted the speed limits his department imposed on oil trains after a fiery derailment outside the Saskatchewan hamlet of Guernsey February 6. The new rules “raise the permissible speed for trains pulling even one car with chemicals that are toxic when inhaled or more than 20 cars loaded with dangerous goods such as oil, liquefied natural gas, or ethanol,” The Canadian Press reports.

“They take a harder line, however, on what the government considers higher-risk trains, setting lower speed limits for trains hauling nothing but dangerous goods or that include 80 or more tank cars of dangerous goods amid bigger loads.”

CP says the updated regulation will stay in place until April 1, while the government and railways work back and forth on new safety measures.