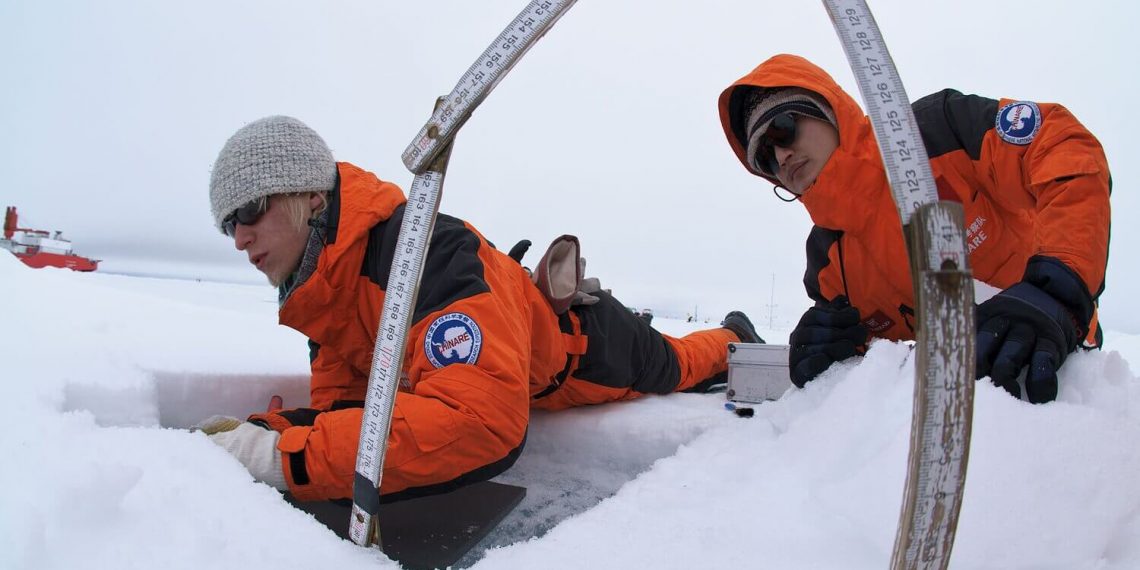 Researchers studying snowpack on the drift ice of the Arctic Ocean: Funding is tight. Image: By Timo Palo

Climate research is the poor relation of the academic world. Since 1990 it’s won less than 5% of the research funds available.

LONDON, 17 February, 2020 – With the crisis of global heating now widely recognised as one of the most challenging issues facing the world today,  you might assume that vast amounts of money are going into climate research.

But researchers at the Norwegian Institute of International Affairs (NUPI)  and the University of Sussex in the UK say the reality is very different.

In a study published in the journal Energy Research & Social Science, they report how they examined a dataset containing details of 4.3 million research funding awards made from 1950 to 2021. In total, the awards were worth more than a trillion US dollars.

After sifting through copious amounts of material, the study’s authors estimate that in the period between 1990 and 2018, only from 2.4% to 4.6% of the total global research funding made available was devoted to investigating aspects of climate change.

They then analysed the various areas of climate change-related funding, looking specifically at the amounts given to research on the issue in the field of social science.

The study comes up with several findings. “The first is that hardly any social science research was conducted on climate change before 1990”, the authors say.

“The second observation is how little funding has gone into research on climate change overall since 1990, regardless of discipline.”

They found that within the funding granted to climate change research, the social sciences received only a relatively minuscule amount.

“From 1990 to 2018, the natural and physical sciences received a total of US$40 billion (for climate change research) compared to only $4.6 bn for the social sciences and humanities.”

“While this research is valuable, it does not tackle head-on the most urgent question: how to change society to mitigate climate change right now”

Contrast these figures with the profits over a similar period by some of the world’s biggest oil companies. According to recent analysis for the Guardian newspaper BP, Shell, Chevron and Exxon made almost $2tn (£1.54tn) in profits in the 1990 to 2019 period – a time when the climate emergency was becoming widely recognised, including within the fossil fuel industry.

The academics say the research carried out within social science has tended to concentrate on ways of adapting to climate change – such as how to manage extreme weather events and recover from disasters – rather than mitigating its effects.

“While this research is valuable, it does not tackle head-on the most urgent question: how to change society to mitigate climate change right now.”

Social science can play a key role in coming up with answers, says the study. It’s vital, the authors say, that issues be addressed such as how to persuade households to adopt low-carbon lifestyles, or how to promote decarbonisation among cultures and market economies as diverse as China, Russia, Saudi Arabia, Singapore and the UK.

“Although the natural and technical sciences often generate results that are, or are perceived to be, clearer and more concrete than the social sciences, they cannot handle issue areas – such as attitudes, norms, incentives and politics – that are intrinsically social.”

The study expresses caveats about its findings: its dataset on funding awards covers only competitive research grants. In some countries such as Germany, France and China, large amounts of research funding are distributed in the form of basic grants, and it is often difficult to know precisely on what areas such money is spent.

The study says social science has to reform itself and be more in tune with what’s happening. “Some social science research is wishy-washy, lacking an understanding of the natural sciences and the physical world.”

Social scientists, it says, need to do a better job of ensuring rigour and validity in their research. – Climate News Network