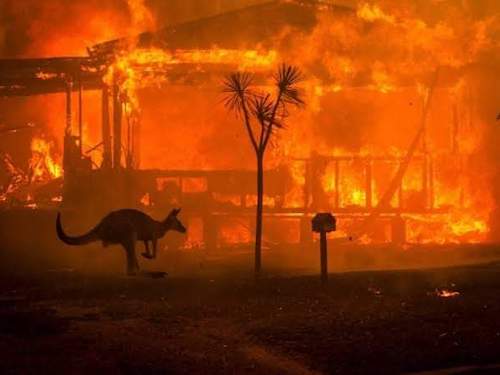 The unprecedented speed and ferocity of Australia’s “megafires” wiped out far more animals than a normal fire would, and those that survived face a perilous future within ecosystems that were already broken by drought before they were incinerated by flames.

“On a typical, average, or normal vegetation fire, many animals can move out of the area and others can hide underground,” writes Wildfire Today, noting that some of these creatures may “even depend on periodic fires to recharge the ecosystem in some cases”. The infernos increasingly wrought by the climate crisis are beasts of a different order, however, as the cruel devastation visited on Australia’s wildfire proved so traumatically.

Citing a CNN report produced while the fires were still raging, Wildfire Today confirmed that as of late December, nearly 30% of the koalas of New South Wales and nearly 30% of their habitat had been destroyed. The CNN story included wrenching descriptions of wombats, which “don’t cope well with heat or stress, and panic at the smell of smoke,” trying, and failing, to outrun the flames.

“The depletion of animals and their homes is a vicious cycle,” CNN added: “Just as animals need habitats to survive, so too do habitats need their animals.” A critical example is the potoroo, a tiny rat kangaroo which plays a crucial role in maintaining forest soil health. “If potoroos are hit by fire, some plant species might be unable to regenerate, which could then kill off other species that feed on vegetation.”

While the Australian government allocated A$6 million (US$4.1 million) in early January “to establish habitat corridors and a plan for releasing animals that have been in hospitals,” CNN added, volunteer wildfire rescuers like Janine Green “fear that unless authorities take decisive long-term action on climate change and animal conservation, the country’s wildlife and environment could face a dire future.”

“They’re not coping, and now they’ve got no grass, no water, no habitat,” Green told the U.S. broadcaster. “Who knows if they can breed after this? We’ve never seen anything like this before.”

Wildfire Today also flagged a January 8 report by Scientific American which emphasized how the survival strategies creatures might successfully deploy for a “normal” wildfire, like burrowing down out of reach of the flames and heat into crevices and hollows, were likely of little use to animals trapped in Australia’s infernos. As for the common assumption that flying creatures like bats and birds should easily escape the flames, “many of Australia’s forest bats are slow flyers—a trade-off for maneuverability in the dense canopy—and may not be able to easily flee the fast-moving infernos,” said University of Sydney ecologist Chris Dickman.

Scientific American added that escaping the immediate flames was no guarantor of long-term survival, since ravaged habitats will offer little in the way of food, water, or shelter from predators for weeks and even months afterwards.