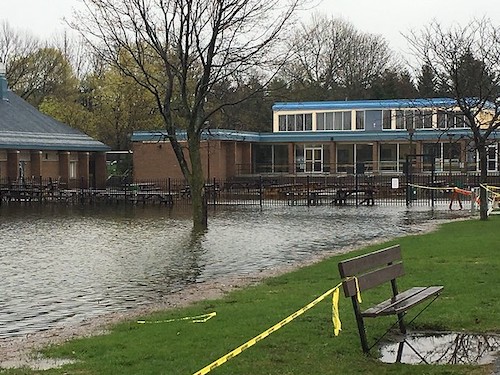 Canadians building or buying new homes in areas at high risk for flooding will no longer have access to federal disaster relief under a new insurance plan set to take effect in the next three years, The Energy Mix has learned.

The new high-risk insurance system, now under development by federal, provincial, and territorial governments, will “replace government assistance and ensure that those who are at high risk pay for their own risk,” said Craig Stewart, vice-president, federal affairs at the Insurance Bureau of Canada, in an interview on the sidelines of Nature Canada’s Nature-Based Climate Solutions Summit in Ottawa.

The new plan will be part of a wider package that includes improved flood plain mapping for the entire country, as well as retrofit funding to help owners improve both the resilience and the energy efficiency of their homes, Stewart said.

The three-year deadline “is not baked in yet,” he told The Mix. “The aim, the objective, is to ensure that every Canadian can obtain high-risk insurance. We will then allow governments to transition out of taxpayer-funded schemes.”

People in existing flood plains “will be grandfathered in, but new developments will likely be excluded,” Stewart added.

“The bottom line is that as long as people are being bailed out by governments, you don’t have a proper incentive system in place,” he told a conference session Thursday morning. “What we expect will happen in future is that if new developments happen in flood plains, there won’t be any insurance backing” or disaster assistance, a change that will “turn off the money tap“ for that form of climate risk.

Stewart explained that home insurance premiums are based on detailed models for everything from earthquake risk or stormwater drainage to the distance from a home to the nearest fire station, with premiums adjusted to reflect each owner’s risk. “Our challenge, however, is how to incorporate natural defences into our risk pricing and build incentives around them, so that if municipalities protect nature in a way that protects us, they will be rewarded” with lower premiums.

The best way to limit the extent and spread of future flooding, he said, is to use nature-based solutions to keep water on the landscape for as long as possible.

One of the major takeaways for the 450 participants attending the conference was the growing gap between municipal engineers who’ve always preferred complex, static flood control infrastructure built out of concrete, and those systems’ limited ability to keep up with local climatic shifts.

Engineered dams, for example, have been touted as a flood control measure, but “in Ottawa they’re useless. They don’t have any flood attenuation benefit whatsoever.” Similarly, stormwater drains work wonderfully—as long as they don’t clog up with twigs, branches, or winter ice damming.

The underlying problem, Stewart said, is that “you can engineer for an ideal event, but no event is ideal. Which is why you need the resilience that nature-based solutions can provide. So we view them as complementary.”

James Bornemann, geomatics manager with the South East Regional Service Commission in Moncton, New Brunswick, described nature as “our most important kind of infrastructure”, adding that municipalities must factor the stormwater services provided by natural landscapes into their asset management and infrastructure decisions.

The latest modelling in Atlantic Canada suggests new infrastructure should be built to accommodate 30% more flooding than historic norms, even though the current rule of thumb is just 20%, he told participants.

“When you look at the life cycle costs, natural assets have a perpetual life cycle, whereas engineered infrastructure has a finite life and has to be replaced,” he said. An engineered system will also become obsolete faster if climate-related risk increases faster than expected, a factor that “poses a risk to the communities and a higher cost to replace them”.