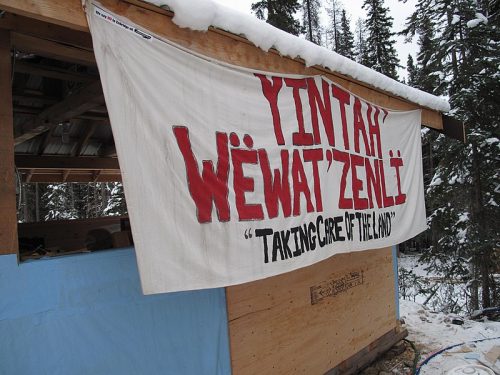 More than a dozen heavily-armed RCMP arrested six people Thursday morning in a pre-dawn raid at a camp on traditional Wet’suwet’en territory, as the force began acting on a court injunction against protesters blocking construction of the controversial Coastal GasLink pipeline.

“It’s a whole damn army up there,” said Wet’suwet’en hereditary Chief Woos (Frank Alec). “They’ve got guns on, they’ve got tactical gear on. They look like they’re ready for war.”

The arrests “were made at kilometre 39—one of three camps built by supporters of the Wet’suwet’en hereditary chiefs—on the traditional territory near Houston, B.C.,” CBC reports, citing a video alert from Gidimt’en clan spokesperson Molly Wickham.

“Six people have been arrested and several others, including members of the press, have been detained and removed from Wet’suwet’en territories in an aggressive pre-dawn raid,” the Unist’ot’en camp writes in an online alert. “Dogs were used, media was banned from filming arrests. Militarized police with night vision and automatic weapons raided the camp in the dead of night.”

The RCMP said it launched the raid at 4:00 AM local time to “remove those whose presence would interfere with the lawful execution of duties,” adding that “local residents, media, and the motoring public may be inconvenienced during the injunction enforcement period.”

The raid “comes two days after last-ditch talks broke down between the B.C. government and Wet’suwet’en hereditary chiefs, after the two tried to find a peaceful resolution to an ongoing standoff over the natural gas pipeline’s construction,” CBC says. “On Wednesday afternoon, RCMP told supporters of the hereditary chiefs to leave the area or face arrest. The force said it had ‘maximized’ the discretionary time frame provided by the court and was moving to enforcement as a result.”

Coastal GasLink President David Pfeiffer called the incident “disappointing”, adding in an open letter that “this is not the outcome we wanted. We have made exceptional efforts to resolve this blockade through engagement and dialogue.”

But the Union of B.C. Indian Chiefs said the raid was a blow to reconciliation between Canada and First Peoples.

“It’s an absolute outrage and deeply frustrating that the RCMP is acting in the capacity of a goon squad on behalf of business and industry,” said Grand Chief Stewart Phillip. “It’s particularly frustrating in the province of British Columbia in the aftermath of the enactment of Bill 41, which fully embraces the UN Declaration [on the Rights of Indigenous Peoples], which speaks about free, prior and informed consent. It was to be the framework to chart a path forward.”

“The use of force against peaceful people is a violation of human rights and First Nations’ rights,” agreed Assembly of First Nations National Chief Perry Bellegarde. “The RCMP is sworn to uphold Canada’s law, but Canada must respect First Nations laws and Wet’suwet’en laws.”

On Wednesday, Wet’suwet’en hereditary chiefs launched a court challenge to the pipeline’s environmental approval, citing “over 50 instances of non-compliance”, CBC says. The chiefs also pointed to the pipeline company’s “failure to incorporate recent findings of the Inquiry on Missing and Murdered Indigenous Women and Girls, which found links between resource-extraction projects, ‘man camp’ environments, and increased violence against Indigenous women,” the national broadcaster writes.

“Details are trickling out. Journalists at the support camp say police blocked them from filming tactical teams and threatened them with arrest. Police drove two reporters 40 kilometres down the road and left them in a parking lot. It’s clear they don’t want a repeat of last January, when daytime images of police in green tactical gear with military rifles provoked outrage around the world,” he wrote.

“Here’s what we do know: the Coastal Gaslink pipeline is integral to the LNG Canada project, a consortium formed by Royal Dutch Shell and state-owned oil companies from China, Malaysia, Korea, and Japan,” Nagata added. “The only way the LNG Canada project is viable, just like the Trans Mountain oil tanker expansion, is with a massive injection of billions of taxpayer dollars. This is our public money at work.”

Canadians “also pay for all the tactical gear and overtime incurred by over 100 RCMP officers that have been massing for weeks in nearby towns. And in a larger sense, we benefit from all the wealth and land taken by force from Indigenous people for the last 200 years,” he said. “If you feel like it’s wrong to push pipelines through Wet’suwet’en territory at the barrel of a gun, you’re not alone. If you think it’s wrong to put billions of taxpayer dollars into expanding the oil industry in the midst of a climate crisis—you’re right.”

Wastewater flushes away a river of wealth