Climate Impact of Commercial Space Travel ‘About to Get Worse’ 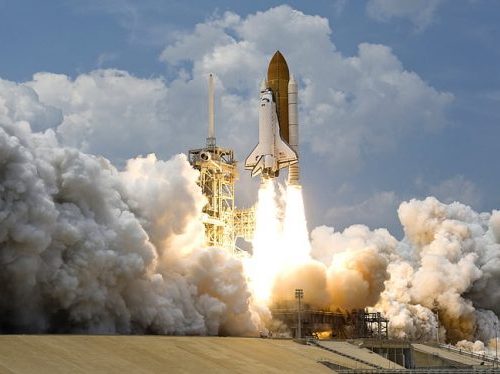 The wild west of commercial space travel remains unconstrained by regulations on rockets’ greenhouse gas emissions, and they’re on track to get worse as the competition among private operators heats up. But some space cowboys are beginning to channel their inner boy scout, racing to build launchers less catastrophic for the planet than the ones they currently use.

When Elon Musk’s SpaceX Falcon Heavy “blasts off on a plume of white smoke, hot gases shoot out of its 27 engines, creating a thrust equal to 18 Boeing 747 aircraft,” writes Bloomberg Green. “Upon reaching orbit, the world’s heaviest operational rocket will have burnt about 400 tonnes of kerosene and emitted more carbon dioxide in a few minutes than an average car would in more than two centuries.” The kerosene has the added destructive effect of producing black carbon, an arch-villain in the chemistry of atmospheric warming.

And then there is SpaceX’s plan to power its Raptor engine with methane—a greenhouse gas 84 times more climate-destructive than carbon dioxide.

Those assaults on the Earth’s atmosphere are “about to get worse,” Bloomberg adds, with the commercial space race accelerating and the number of launches set to “increase tenfold to roughly 1,000 annually in the coming years.” The key players include Musk’s Space Exploration Technologies Corporation, Jeff Bezos’ Blue Origin LLC, and Richard Branson’s Virgin Galactic Holdings Inc., along with numerous other smaller challengers.

The environmental impact of that traffic is not lost on Chris Larmour, CEO of British rocket maker Orbex, which claims its planned use of bio-propane “can cut CO2 emissions by 90% compared to traditional launch fuel.”

“Climate change is real, and we don’t want to make it worse,” Larmour told Bloomberg.

While the environment was on no one’s radar when the commercial space race began, said Jean-Marc Astorg, director for launch vehicles at the French space agency CNES, attitudes are changing. Blue Origin is hoping to propel reusable rockets using clean-burning liquid hydrogen. Virgin Galactic is banking on “lightweight spaceships that can fly hundreds of times to mitigate its environmental impact”, with rockets that “burn for only 60 seconds.”

Europe is definitely out in front in the quest to build climate-friendlier space junkets, writes Bloomberg, noting that Rocket Factory Augsburg, a unit of German satellite maker OHB SE, “took environmental issues into account from the start in developing its ‘mini-launcher.’” The system is intended to avoid kerosene, and therefore black carbon, as well as “hydrazine, a highly toxic liquid used to fuel upper stages and satellites,” the news agency says. The company’s mini-rocket, “scheduled to perform its maiden flight next year,” will use “a new environmentally friendly propellant,” the ingredients for which are all “available in a do-it-yourself-store,” said Chief Engineer Stefan Brieschenk.