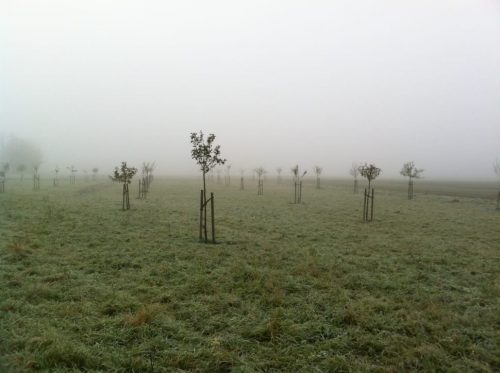 Constraints of time and space, the likelihood of accounting boondoggles, and the fact that forests are inherently unstable climate sinks, ever more so as the planet warms, could make the World Economic Forum’s newly-announced Trillion Tree Initiative a dangerous distraction from what really needs to be done to rein in the climate crisis, the MIT Technology Review warns.

Given a green thumbs up by both primatologist Jane Goodall and perpetually avid golfer Donald Trump at the WEF’s annual event in Davos, Switzerland, the Trillion Tree Initiative might seem a very good idea, writes MITTR Senior Editor James Temple. But it’s actually “a limited and unreliable way of addressing climate change,” and a path open to abuse by those interested in maintaining a fossil fuel-laden status quo.

“As we think through the role trees could play in combating climate change, it’s crucial to consider several issues,” Temple writes, beginning with the reality that most trees grow very slowly, while the time to address with climate crisis with any hope of success grows very short—meaning that tree planting cannot be a substitute for immediate, rapid decarbonization.

The second problem is scale. Planting a trillion trees around the globe, “assuming a relatively dense 2,000 trees per hectare, would require about 500 million hectares (1.2 billion acres),” he continues. While a paper published last year in the journal Science “estimated the amount of land around the world that could support continuous tree cover and isn’t currently being used by humans [to be] about 900 million hectares (2.2 billion acres),” the estimate has been “hotly” contested by other experts, who contend “that some of the land is likely dedicated to livestock grazing, while others argued that much of it may not really be suitable for forestation efforts.”

Temple notes that “absent other climate policies,” the United States would “need to dedicate nearly 155 million hectares (371 million acres), or well over twice the area of Texas,” to fully compensate for the 5.8 billion tons of greenhouse gases emitted by the nation’s economy last year.

Then there are the accounting problems that have attended tree-planting-for-climate programs to date. “Studies and investigative stories have consistently found that carbon offset programs, including those established by the UN and California, have dramatically overestimated reductions from trees and invited gamesmanship among landowners.”

The reality that trees are not permanent carbon sinks, even at the best of times, should also give trillion-tree advocates pause, says Temple. “When trees and plants die, whether from fires or logging or simply falling down, most of the carbon trapped in their trunks, branches, and leaves simply returns to the atmosphere.”

“Just shifting the stock of CO2 from the atmosphere to the land biosphere is not a permanent sequestration of emissions,” cautioned Jane Flegal, adjunct faculty at Arizona State University’s School for the Future of Innovation in Society. “Carbon sinks can become carbon sources very quickly.”

And that volatility will only increase with climate change, Temple writes, noting that “droughts and higher temperatures are expected to strain forests and make them more susceptible to beetle infestations and major fires.”

All of which calls for rapid deployment of “other land-based solutions, like better ways to store carbon in soil, and a still-theoretical [and hotly-contested] concept known as bioenergy with carbon capture and sequestration,” he concludes. “If we hope to feed a rapidly growing global population, we’ll likely need technological solutions that don’t take up a lot of land, such as direct air capture,” he adds.

What countries must also do, Temple stresses, is shed the pervasive myth that “trees will save us”—an appealing hope for many, but a dangerous one which “those hoping to stall or limit more effective efforts will very happily exploit.”