Saugeen Nation Sends OPG Back to Square One, Voting 86% Against Nuclear Waste Site 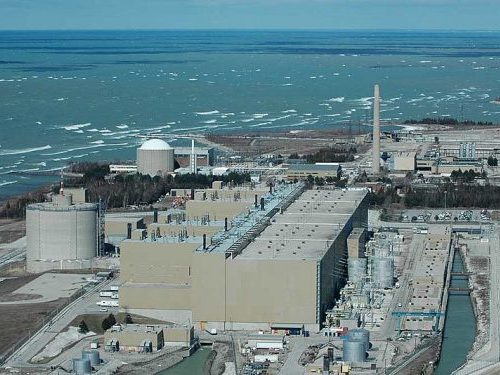 The 4,500-member Saugeen Ojibway Nation has voted by an 86% margin to reject Ontario Power Generation’s plan for a radioactive waste repository at the Bruce nuclear station in Kincardine, about 1.2 kilometres from Lake Huron, prompting OPG to launch a search for a new location and Sarnia Mayor Mike Bradley to declare a “huge victory”.

While Kincardine was a the plan “willing host”, the proximity of the planned site, a permanent bunker located 680 metres underground, “sparked a backlash elsewhere in Canada and the United States,” The Canadian Press writes, in a post republished online by CTV News. “Politicians, environmentalists, and scores of communities expressed opposition.”

“We were not consulted when the nuclear industry was first established in our territory,” said the Saugeen Nation, which includes the Chippewas of Saugeen First Nation and the Chippewas of Nawash Unceded First Nation. “Over the past 40 years, nuclear power generation in Anishnaabekiing has had many impacts on our communities, and our land and waters.”

“We worked for many years for our right to exercise jurisdiction in our territory and the free, prior and informed consent of our people to be recognized,” added Chippewas of Saugeen Chief Lester Anoquot, who called the 170-1,058 vote an “historic milestone and momentous victory” for the community.

“We didn’t ask for this waste to be created and stored in our territory,” he added.

“It’s a huge victory for the environmentalists, for the Great Lakes mayors,” said Sarnia Mayor Bradley, who had spent eight years fighting the proposal due to the risk of lake water contamination. “I first got involved in this issue in 2012, [but] had little hope at that time of reversing this decision. It really spoke to people power. I believe there were close to a thousand different groups and people that spoke at the hearings against it.”

After successive federal governments withheld final approval for the repository, then-environment and climate minister Catherine McKenna paused the project in August 2017, seeking buy-in from Indigenous communities in the area, CP says. OPG, “which insisted the stable bedrock would safely contain the waste, items such as contaminated reactor components and mops, said it would respect [Saugeen]’s decision.”

“OPG will explore other options and will engage with key stakeholders to develop an alternate site selection process,” President and CEO Ken Hartwick said in a statement. “Any new process would include engagement with Indigenous peoples as well as interested municipalities,” but “permanent and safe disposal is the right thing to do for future generations.”