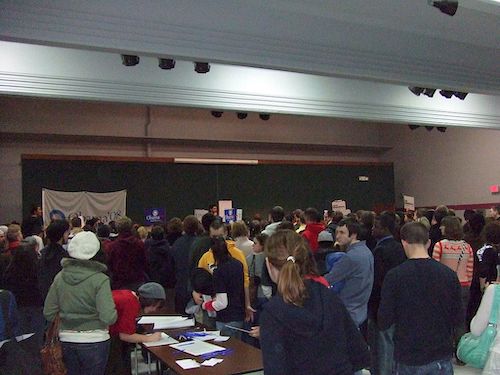 Before Iowa Democrats could even declare the winner in their app-plagued presidential primary Monday night, the Washington Post was calling the race in a different way, with the climate crisis emerging as a top concern for caucus participants.

“The night of the Iowa Democratic caucus ended in chaos and without an announced winner,” but there’s “one thing that is clear: Climate change was a top priority among caucus-goers,” the Post reports. “More than one in five Iowa caucus-goers said climate change mattered the most to them when deciding whom to support,” making climate the second-most important vote-determining issue in the caucuses, after health care.

The analysis, drawn from a preliminary entrance poll conducted for the Post and other media organizations by Edison Media Research, “solidifies a major shift, since climate change for years has been considered an afterthought among voters and candidates alike,” the paper writes. This time, “climate change ranked above both foreign policy and income inequality” as a priority for caucus voters.

The detailed breakdowns from the poll show health care as the top concern for 42% of caucus participants, followed by climate change at 21%, income inequality at 18%, and foreign policy at 13%. Climate ranked highest among 26% of the voters who caucused for Sen. Bernie Sanders (I-VT) and 26% for former South Bend mayor Peter Buttigieg, 14% for Sen. Amy Klobuchar (D-MN), 13% for Sen. Elizabeth Warren (D-MA), and 8% for former vice president Joe Biden.

With 62% of the caucuses reporting as of Tuesday evening at 9:25 PM Eastern and the candidates massing in New Hampshire ahead of the Granite State’s primary vote February 11, Buttigieg and Sanders appeared to be leading the Iowa caucuses, capturing 10 delegates each, followed by Warren with four, with Biden and the app responsible for the epic reporting glitches emerging as the landslide losers for the night.

“Those seeking the Democratic nomination spent much of the past year contrasting themselves with [Donald] Trump on climate change, which the president has dismissed as a ‘hoax’ and to which his administration has paid little regard as it rolls back regulations,” the Post writes.

“We say to Donald Trump and the fossil fuel industry that climate change is not a hoax but is an existential threat to our country and the entire planet,” Sanders said, in his first Iowa campaign rally in March.

“The quest for the carbon-negative farm could be as big a symbol of dealing with climate change as the electric car,” Buttigieg said in November, positioning himself as a moderate who could recruit “everybody to be part of the solution, including conservative communities where a lot of people have been made to feel that admitting climate science would mean acknowledging they’re part of the problem.”

Sanders joined Rep. Alexandria Ocasio-Cortez (D-NY) last week to introduce legislation for a national ban on oil and gas fracking. Buttigieg doesn’t support a full ban, the Post says, but has “talked about climate change on the campaign trail by repeatedly hammering home how farmers like those in Iowa can be part of the solution.”

George Mason University climate communicator Ed Maibach said Iowans would be more likely to link bad weather to climate change. “In a state like Iowa,” he told the Post, “the impacts of weather have a direct impact on agriculture.”