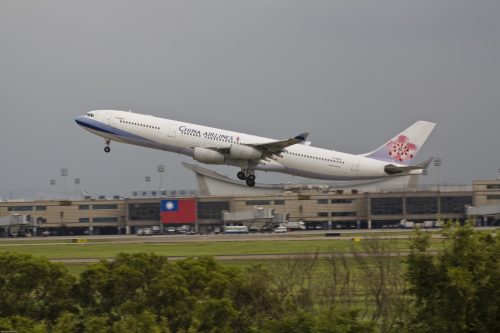 Despite the spread of the “flight shame” phenomenon and industry pledges to address the carbon footprint of aviation, greenhouse gas emissions from commercial flights are expected to increase 300% by 2050, with emissions from China’s aviation sector projected to nearly quadruple.

“According to analysis published last year by the International Council on Clean Transportation (ICCT),” writes Carbon Brief, “Chinese flights emitted 95 MtCO2 (megatonnes of carbon dioxide) in 2018, making up 13% of global aviation emissions,” a finding that places that country second in global emissions. First in the world was the U.S., at 182 MtCO2, while U.K. flights that year emitted 30 MtCO2.

And there is little sign of a slowdown. This year, the Chinese aviation sector is expected to hit 130 MtCO2, according to a study by the China Academy of Civil Aviation Science and Technology and Nankai University, recently published in the journal Energy Policy. Citing an International Air Transport Association (IATA) prediction, Carbon Brief adds that China will “overtake the U.S. as the world’s largest passenger market by 2029.”

Faced with a dearth of research on CO2 emissions from China’s aviation sector, the authors of the recent Energy Policy paper created their own forecasting model for long-term carbon emissions, “taking into account the growth rate of distances being travelled, fuel consumption, and replacement rate of biofuels as fossil fuel alternatives.”

Although “the alternative fuel factor has not yet played a role in emissions and the future development trend is uncertain,” the Chinese scientists say the uptake of biofuels appears essential to achieving a low-carbon scenario.

“Under their ‘benchmark’ scenario, in which demand rises while average distance travelled and fuel efficiency remain constant, and biofuels are not a factor, emissions rise to 456 MtCO2 by 2050, 3.5 times higher than in 2020,” says Carbon Brief. “Worse, under the ‘development’ scenario, in which the average distance travelled by passengers continues to rise, the emissions nearly quadruple to 516 MtCO2 by 2050.”

But while the numbers are plausible, especially in terms of traffic growth and fuel efficiency improvements, there exists “no good baseline for assessing the scenarios with significant level of biofuel replacement used in this study,” Sola Zheng, an ICCT researcher specializing in Chinese aviation, told Carbon Brief. And though “the figures that are available suggest growth in the aviation sector—and accompanying emissions—will generally be slower in historically richer nations,” those nations are still contributing significantly to global aviation emissions.

While IATA points to “demand from people in developing economies” as the driver behind any rise in future emissions, “ICCT’s per-capita analysis shows that people in Australia, North America, and Europe are having a disproportionate impact,” says Carbon Brief, not least because the U.S. and the UK both “host major aerospace manufacturers.”

And then there is problem of historical emissions.

While China had initially signalled support for the Carbon Offsetting and Reduction Scheme for International Aviation (CORSIA) developed by the International Civil Aviation Organization, it “subsequently declined to participate in the voluntary pilot phase beginning next year.”

In a joint statement with Russia, China accused CORSIA of lacking “moral fairness”. The two countries contended that, “given the difference among countries in development stage, historical responsibility, and coping capability, the ‘one-size-fits-all’ approach for CORSIA implementation orchestrated by developed countries is a de facto reversion to the law of the jungle.”