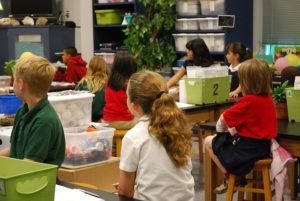 Alberta Education Minister Adriana LaGrange is weighing in with a new definition of “balance” in climate change education for K-12 students, after getting wind that students are acquiring the “extremist view” that we’re running out of time to get the climate crisis under control.

LaGrange “is endorsing a panel report that recommends school children learn all views about climate change along with the value of the province’s oil and gas sector,” The Canadian Press states.

“There was a particular document that was shown to me recently—and I currently have my department exploring—in terms of our children being taught that they are the final generation to deal with climate change,” the minister explained. “Climate change is real, but we do want that presented to our children in a balanced way.”

Asked what a more balanced curriculum would look like, LaGrange replied: “We would be looking for research, evidence-based knowledge to be transferred to our students, and that will be included in the curriculum at age-appropriate time periods.”

The panel report, released Wednesday, tells the Kenney government to “ensure the social studies curriculum reflects a balance of perspectives with respect to the importance of Alberta’s resource-rich economic base in relation to the impact on the economy, families, services, and government.” CP says that finding “echoes a promise by Alberta’s United Conservative government to reframe the terms of what it has called a damaging, one-sided debate on climate and the role of the energy industry.”

NDP education critic Sarah Hoffman said she’s all for giving students all the facts and teaching them to think critically, but contended the government’s definition of “balance” looked a lot more like “subliminal imbalance”, the news agency adds.

“I do think there are ulterior motives here,” she said. “It’s very clear this government has a very significant bias. They are spending C$30 million a year on a war room to attack facts.”

Alberta Teachers’ Association President Jason Schilling said the panel report recommends tasks that teachers are already taking on, like teaching literacy and numeracy and making sure all views are heard on complex issues. “He urged LaGrange to contact his organization if she has concerns about speakers in schools or how climate change is being taught, ‘as opposed to making comments like this in the media’,” CP writes.