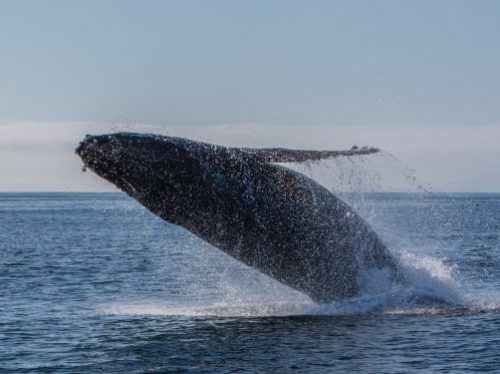 An ocean heat wave in the mid-2010s drove whales closer to the California coast, where an “unprecedented” number of them became entangled in fishing gear, according to a new study in the journal Nature Communications.

“A major heat wave on the U.S. west coast between 2014 and 2016 saw record entanglements of humpback and other whales recorded,” The Independent reports. “The rise in entanglements is thought to have occurred because the warmer waters meant whales had moved to feed in an area closer to the coast which is used for crab fishing.”

“With the ocean warming, we saw a shift in the ecosystem and in the feeding behaviour of humpback whales that led to a greater overlap between whales and crab fishing gear,” said lead author Jarrod Santora, research scientist at the U.S. National Oceanic and Atmospheric Administration’s Southwest Fisheries Science Centre in Santa Cruz, CA.

The research team called for a new alert system to keep crab fishers up to date on entanglement risk and “help managers adjust to more rapid and frequent changes in the marine environment,” the UK-based paper adds. They’re developing a website that will use ocean data to forecasts the whales’ most likely coastal feeding sites.

“We need to put information in the hands of those who can use it, at a time when it can make a difference,” Santora added. “We are seeing changes coming at us in ways they never have before.”

The news story recounts the 2014 heat wave that produced “the warm blob”, a large expanse of unusually high temperatures that attracted subtropical species that were rare in the area and made the humpbacks’ usual diet of krill more scarce. “The whales switched to feed instead on high concentrations of anchovy which the warm, less productive waters had squeezed into a narrow band near the coast,” The Independent explains.

Then a record bloom of toxic algae shut down the crab fishery from November 2015 to March 2016. “When toxin levels eased and the Dungeness season finally opened, fishermen set multitudes of crab traps in that same narrow band where many whales were feeding closer to shore,” leading to a record 53 entanglements in 2015 and 55 in 2016.

With 30 or 40 humpbacks routinely visible from her front windows, “in our lifetimes living here, that was unprecedented,” recalled study co-author and Moss Landing, CA research biologist Karin Forney. “We knew something dramatically different was pulling these whales closer to shore.”

The surging number of entanglements initially triggered lawsuits that threatened to limit crab fishing. But “a focus on entanglements and better research into their causes has also led to improved communication between fishermen, environmental groups, and managers,” The Independent says.

“If the working group knew then what we know now, it wouldn’t have happened,” said San Francisco crab fisher John Mellor. “The more we understand the whole picture, the better chance we have to mitigate the impacts.”